[ SCATTER MY ASHES AT BERGDORF'S screens Saturday September 7th at 7:25 pm and Sunday September 8th at 4:00 pm at the Cleveland Cinematheque.] 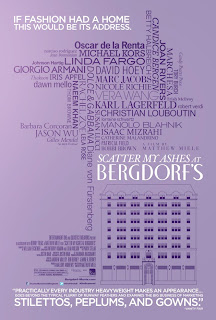 Although billed as a documentary, SCATTER MY ASHES AT BERGDORF'S is really more of a long form advertisement, a love letter to the high end New York department store Bergdof Goodman. And there is little if any attempt to contextualize what the film shows us outside of the rarefied bubble of fame, fortune, and fashion in which it exists.


Film producer Jean Doumanian perhaps best sums up the underlying ideology at the heart of SCATTER MY ASHES AT BERGDORF'S when interviewed in the film, saying, “If a young girl is going to college she can't wait to become a lawyer or get a full time job so she can buy that pair of shoes that she's been looking at. Everyone wants to better themselves, so they aspire and I think that's why stores like this are necessary. To make people want to aspire to bigger and better things. You need this for the American dream. For people to actually reach it, they have to see it.” That there are plenty of people who subscribe to such a shallow and materialistic version of the American dream is without question. Less certain is whether that's as healthy a thing as Doumanian and the many other luminaries from the worlds of fashion and entertainment who are interviewed in SCATTER MY ASHES AT BERGDORF'S seem to believe it is.

Unfortunately director Matthew Miele isn't the least bit interested in pursuing such questions. Nor does the film ever really get below the surface of its subject on any level. It's well shot and fairly exhaustive in the way it recounts all the many and varied designers who have strived to get their collections into the store and succeeded, and good for them. For the casual viewer, though, even one with some interest in fashion, there's very little here of substance.