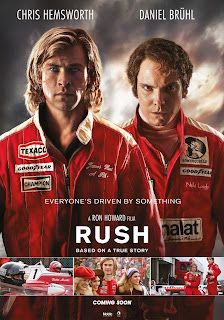 A character in Ron Howard’s new racing film suggests men cars as much as women.

Maybe so for some guys, but in order to get the average moviegoer to care about an automobile—even a Formula One hotrod—any more than the latest model Frigidaire, a director must first get them to care about the men behind the wheel.

There may also be some truth to the statement that people only watch racing for the crashes.  But when one of RUSH’s impetuous pilots goes up in flames, our emotional investment in his well-being testifies that Howard and his screenwriters successfully breathed any amount of life into the driver to begin with.

RUSH throttles us back in time 35 years to the gripping 1976 Formula One season, whose sixteen races provided the backdrop for some fierce competition between the British Hunt and Austrian Lauda.  We’re introduced to both men as ambitious upstarts in 1969, with Hunt paying his dues driving for Team Hesketh in Formula Three and newcomer Laudi defying his wealthy father and buying his way into the elite division.  Preliminary races establish the drivers’ contrasting philosophies with respect to racing (and life itself, as the narrative unfurls) and ratchet the tension early.  When Hunt’s team fails to secure sponsorship, the impetuous speed demon instructs his manager / brother to “find me a drive” just to stay in the game.

Hunt charms his way onto Team McLaren as Laudi impresses Swiss racer Clay Regazzoni and Team Ferrari with his extensive mechanical knowledge.  Having plopped the subjects in their cars, Howard juxtaposes breathtaking performance footage in exotic locales with dramatic—and often private—moments between the adversaries and those closest to them.

The handsome Hunt’s appearance alone is sufficient to melt the female staff at a hospital waiting room.  Within minutes, the carefree playboy turns the tables on the nurse (Natalie Dormer) probing his body—but Gemma soon becomes one of many ladies left choking his dust.  James downs shots of booze (and hits the occasional joint) before slinking into the cockpit and indulges his hedonistic whims between contests (and bed sheets).  He gets so stoked before racing that he vomits, which his colleagues consider lucky.  Hunt’s reliable quips are reporter’s dream, fans and fellow racers worship him (the television cameras love him more), and doting Alexander Hesketh (Christian McKay) calls him “Superstar.”  But the young driver’s actress wife Suzy Miller (Olivia Wilde) can’t tolerate his irrepressible ego for long.

A stickler for safety, pragmatic Lauda accepts the 20% chance he’ll be killed whenever he puts on the helmet and gloves but is hyper-cognizant of every variable—however remote—that increases the risk even slightly.  He identifies and exorcises the devil in every detail, shaving two seconds off a qualifying time by rebuilding an engine with magnesium parts (a fair modification) and challenging an opponent’s victory because the prize chassis is two centimeters too wide for the rulebook.  Lauda knows he's boorish and not particularly good-looking, and doesn’t protest even when Hunt calls him a rat.  The defending champ finds beauty in the physics of his profession and scoffs when others overlook his fastidiousness.  Lauda clearly loves racing, but he isn't comfortable wearing his joy on his face.

“Happiness is the enemy,” he surmises.  “When you’re happy, you know you have something to lose.”

Hunt believes—or thinks he believes—it’s the flirtation with death that makes racing such a thrill.  He hasn’t any patience for Lauda’s prickly mannerisms and blanches when the Austrian—who leads him by several points at the German Grand Prix—proposes cancelling the crucial Nurburgring race on account of rain.  The affable Hunt easily persuades their colleagues otherwise.

“Sometimes it helps when people actually like you, Niki,” teases Hunt after the vote.

Still, the racers are able to find common ground (apart from the slick circuits over which they shift gears) and develop a mutual respect and admiration for one another’s skills.  It’s as if Hunt and Lauda had an unspoken gentleman’s agreement that they’d earned the right to criticize and cajole one another, but God help any outsiders hurling insults their way.

The movie is peppered with laughs.  Riding passenger with his future wife, Laudi correctly diagnoses a half dozen problems with her vehicle basely solely on the sensory input to his ears and ass.  Soon thereafter, the cautious “Kraut” is goaded into speeding across the Italian countryside—to the delight of the car’s owner.
We witness Hunt and Lauda revving engines in Spain, Sweden, Holland, and Japan, but there are no revealing close-ups mid-race: Helmets, visors, and flame-retardant masks obliterate the actor’s faces.  It’s left to cinematographer Anthony Dod Mantle (127 HOURS, DREDD) to portray the exhilaration of Formula One and the adrenaline coursing through the drivers with wide shots of mockup cars veering round precarious turns and jockeying for position down straight-aways, occupants cocooned inside the insignia-adorned fiberglass frames (or coffins, as one driver puts it).  The editors also throw macro-shots of wheels whirring, exhausts fuming pistons pumping, and spoilers…er, spoiling onscreen to fill visual gaps.  There’s even a few crotch-cam shots from within the vehicles that show jump-suited drivers stomping on clutches, shifting gears, and swerving, the frames imbued with moderate shake to simulate turbulence.  Hans Zimmer’s (GLADIATOR, INCEPTION, MAN OF STEEL) vigorous score complements the high-velocity action, with vintage rock and roll from Steve Winwood and Dave Edmonds overheard at parties and pit stops.

The winsome THOR star devours scenery with his hippie blonde hair, blue eyes, and smile.  We didn’t know Hunt well enough to judge the accuracy (or fairness) of Hemsworth’s portrayal, but the part of the bohemian-yet-ambitious driver appears to have been a role the 30-year old Avenger relished.  Bruhl (INGLOURIOUS BASTERDS) is magnificent as dry, rational Lauda, whose personality is fragmented after a horrific crash.  Alexandria Maria Lara plays the Austrian’s devoted, worrisome wife, Marlene, whose POV becomes significant later. Buckle up.  3 out of 4 stars.
Posted by Peter M. Roche at 12:01 AM