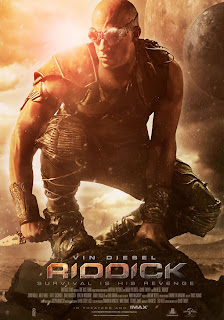 Vin Diesel's nocturnal anti-hero is back for a third go-around in RIDDICK. And as the film begins, Riddick is in pretty bad shape. He's stranded on an alien planet, a victim of some double-crossing by the Necromongers from the previous film, and has a broken leg. To make matters worse, the planet is extremely inhospitable both in terms of terrain and native fauna. The pterodactyl like fliers and feral dog like beasties are bad enough, but the poisonous scorpion-like critters are the worst. Nonetheless, Riddick manages to survive, along with one of the dog-like creatures he has domesticated, and makes his way to an area of the planet that is at least moderately civilized. It's just a small outpost for bounty hunters, and Riddick is well aware that he's a wanted man himself. Still, getting some kind of ship to land, even one crewed by men who want to collect the price on his head, seems Riddick's only hope for escape.

As it turns out, not one but two groups of bounty hunters show up. The first to arrive is led by the arrogant and greedy Santana (Jordi Mollà) just wants Riddick dead (he's worth more that way). The second group is led by Boss Johns (Matt Nable), father of the bounty hunter who had captured Riddick in PITCH BLACK and he just wants to know what happened to his son. There's eleven seasoned bad-asses after Riddick altogether, the most notable being tough as nails lesbian Dahl (Katee Sackhoff), musclebound merc Diaz (Dave Bautista), and the devoutly religious bounty hunter Luna (Nolan Gerard Funk). Riddick knows full well that a coming storm will bring with it an onslaught of the scorpion creatures and tries to bargain with the various parties hunting him so that everyone can just get off the planet, but such reasonable resolutions wouldn't give us much of a movie, now, would they?


The film is quite distinctly broken into three parts, with the first section where Riddick has to simply survive in a world with few resources while fending off the various hostile native creatures being the best. The middle section is largely concerned with the two factions of bounty hunters fighting amongst each other as Riddick plays them off against each other for his own ends. Finally, the film turns into an all-out creature battle as everyone finally realizes that the scorpion monsters don't give a much of a damn about anyone's aspirations to wealth or need for personal closure; they just want to kill them all. Working together is the only hope for survival, but the odds of that happening seem pretty low.


What we have here is just a good, solid B movie that knows what its audience wants and delivers it. It may be a little bit slicker than a seventies Roger Corman New World Pictures production, but unlike so many attempts to turn drive-in movies into big budget blockbusters, RIDDICK seems to have the same spirit, intelligence, and integrity as those old exploitation films. It is unapologetically and unashamedly R-rated, unpretentious entertainment geared towards bloodthirsty action/sci-fi/horror fans, and for the most part that's just fine with this reviewer. Solid B movie casting, too, with just about everyone a perfect fit for their role and bringing life and depth to what could easily have been cardboard characters.


That doesn't mean there aren't aspects of the film that come up short, though. In particular, there's an unpleasant vibe of casual misogyny that runs through the film in the way Sackhoff's Dahl is treated by the other characters. Yes, I'm aware most of the characters treating her in this way are supposed to be unlikeable, and she tends to get the best of them in the end, but the way the film treats threats of rape as almost good natured ribbing just didn't sit well with me. On top of that, the approach to Dahl's sexuality seems out of another era, like the late sixties/early seventies. You know, when all a lesbian needed was one good man to cure her of her sapphic ways. The film plays it coy and doesn't show us whether or not Dahl switches teams, but it's almost more annoying how it tries to have it both ways as to whether or not she has it both ways. I'm probably already well into someone's idea of spoiler territory here as it is, so I'll leave it at that.


Also kind of pointless is Luna's religious fervor. This character and his beliefs get enough screen time to make us think there's some point to them, but there's just no payoff. His religion is made an issue, and then portrayed as neither a positive or a negative, and the character has very little impact on how things play out. I'm all for greater character development in movies like this, but it has to have some point.


There are other little bits and pieces here and there that could have been handled better, but overall the film is entertaining. The aforementioned issues did affect my enjoyment of the film, but not enough to ruin it altogether. In fact for the most part, I had a good time with RIDDICK in all his nasty but strangely honorable glory. 3 out of 4 stars.