Repost: Nausicaa in the Valley of the Wind (September 12th and 14th at the Cleveland Cinematheque)

[NAUSICAA IN THE VALLEY OF THE WIND screens Thursday September 12th at 8:35 pm and Saturday September 14th at 5:15 pm at the Cleveland Cinematheque.] 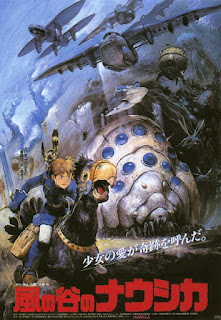 I had semi-serious intent to go to the multiplex and review a new release for you all, but…smeg! What a rotten selection last weekend! Just about everything new has been getting genuinely terrible writeups. No kidding, in a movie marketplace like this, INNOCENCE OF MUSLIMS would probably get a wide release, had only the filmmakers had the foresight to make it in Real3D. Fortunately, as part of its Hayo Miyazaki series, the Cleveland Cinematheque is bravely looking backward.

One connoisseur called NAUSICAA IN THE VALLEY OF THE WIND the best animated feature of 1984 - which is faint praise, a bit. That year, if my memory serves, Disney was in a creative slump, challenger Don Bluth was having money problems, and audiences were rejecting third-party contenders like they rejected Ronald Reagan opponents at the election polls. Nelvanimation's ROCK AND RULE and the George-Lucas-produced TWICE UPON A TIME, and Will Vinton's stop-motion projects, interesting as they might have been, just didn't catch fire at the box-office. And if Ralph Bakshi was getting any heat it was through one of his few family-friendly projects, a TV "Mighty Mouse" redo. You kids reading this in 2012 probably don't even recognize any of these names, do you? Maybe Disney. Never underestimate the appeal of Hanna Montana or CAMP ROCK.

But Japan's Hayao Miyazaki, co-founder of Studio Ghibli (thus legitimate claimant to being Japan's equivalent of Walt Disney) brought everything he had to NAUSICAA IN THE VALLEY OF THE WIND. And as much as his techniques and tropes would become imitated and repeated over the years, the hit visionary fantasy still impresses. It even made an appearance, then rare, widely distributed on US tape-cassette home video, in a VHS re-edit and English dub entitled WARRIORS OF THE WIND.

The title character, Nausicaa, is a far-future princess in an agrarian-level kingdom, a beyond-post-apocalyptic world where plant and animal life - insects especially - have evolved into giants. Enormous caterpillar-grub-things are practically godlike, in fact, and, if stirred to red-eyed anger, can trample what's left of humanity under their multiple legs like so many schoolboys stomping ants.

Nausicaa, an unabashed eco-activst (the Reagan cabinet would have had the FBI bug her throne room), attempts to maintain detente between her human subjects and the creatures, but that proves an exercise in Spielberg-level danger and cliffhanger peril when the land is invaded by a militant, technologized rival kingdom (in suspiciously WWII-looking flying-fortress aircraft). Their princess is one angry bitch, with prosthetic armored limbs replacing the ones torn off by the insects in her childhood, and she plans to get revenge on the big bugs with a dreaded, long-dormant biological doomsday weapon.

The epic was adapted by Miyazaki from his own multi-installment "manga" comic-book series. I had the opportunity to read some of the late-entry volumes, which turn out to be rougher and edgier than the screen version and give a deeper background to how this world came about. But the movie can be savored on its own visually enthralling terms. Even before the age of digital-animation shortcuts (which even Miyazaka came to adopt), the hand-drawn art, amazing creatures, costumes and gadget designs, and painted backgrounds are stunning. The storyline plays well into career-long Miyazaki themes of reverence for nature and strong heroines. Some buffs think this is Miyazaki's best work. I'm not sure I'd go that far, but it beats SMURFS AND THE MAGIC FLUTE and anything else done by 1984 standards... Heck, even by KUNG FU PANDA standards...it's well worth seeing on the big screen.

So, Japan, you gonna get with your treasured Miyazaki and stop with the leaky nuke plants and the slaughtered-to-extinction whales, porpoises and edible fish? No? Oh, there has to be a flying girl messiah with inhumanly long legs who doesn't look the least bit ethnic Japanese to kick some sense into you first? I guess that's consistent, anyway. (3 1/4 out of 4 stars)
Posted by Bob Ignizio at 12:00 AM