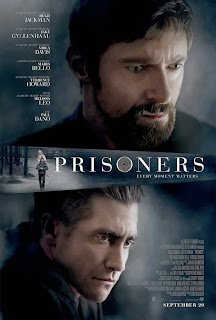 With its 2 1/2 hour running time, deadly serious tone, and a cast and crew of Hollywood heavyweights, several past Oscar nominees and winners among them, it's clear before you even see the first frame of film that PRISONERS is going for some Oscar gold of its own. One can only hope the Academy doesn't take the bait, as Hollywood doesn't need the encouragement to crank out more bloated, ridiculous thrillers like this one.


Opening with a scene that is not so much relevant to its plot as it is to its alleged themes, PRISONERS lets you know right from the start that it thinks it's an important, serious film. Survivalist dad Keller Dover (Hugh Jackman) is explaining to his son Ralph (Dylan Minnette) the importance of always being prepared right after the boy has displayed his hunting skill by taking out a deer with one shot. Then we're off with the Dover family – which also includes Keller's wife Grace (Maria Bello) and daughter Anna (Erin Gerasimovich) – for Thanksgiving dinner with the neighboring Birch family – dad Franklin (Terrence Howard), mom Nancy (Viola Davis) and daughters Eliza (Zoe Soul) and Joy (Kyla Drew Simmons). Shortly after dinner, Anna and Joy will take a walk over to Anna's house and disappear.


The only clue to what happened is a shabby looking RV that Ralph remembers the girls playing on earlier, now gone from where it had been parked in front of a nearby house. After a search by the frantic parents fails to yield results, the police are called in with Detective Loki (Jake Gyllenhaal) heading up the investigation. He has a reputation for solving every case he's taken on, and it isn't long before he finds the RV and its driver Alex (Paul Dano), a simpleton whose disheveled appearance and suspicious mannerisms practically scream “movie psycho”. But there's simply not enough evidence to hold the guy, and he gets released into the custody of his Aunt Holly (Melissa Leo).


Keller is certain that Alex is the guilty party, and since he doesn't think the police are doing their job, he decides to do it for them, kidnapping Alex and taking him to an abandoned apartment building. There Kellen tortures the man, fearing that time is of the essence if the girls are to be found alive. Meanwhile Detective Loki stumbles upon another mystery from the past and finds a potential new suspect in another squirrelly looking character named Bob Taylor (David Dastmalchian).


The moral question PRISONERS makes a pretense of asking is whether Keller is justified in his actions, and what sort of effect does going down that road have on him and his friends and family. I say it makes a pretense of asking that question because, in the end, the film isn't particularly interested in answering it, or even giving the audience much in the way of food for thought on the subject. There's a difference between showing that an issue is black and white, and trying to have it both ways, and the way PRISONERS handles its central theme is definitely in the latter category. It wants to come off as having something of substance to say, but doesn't want to risk ruffling any feathers by actually taking a stand one way or the other.


Rather than being the substantive crime drama it thinks it is, what we have here instead is a “B” level suspense thriller that takes itself too seriously and drags on far too long. Not only is it unwilling to take a firm position on Keller's vigilantism, it has nothing new or worthwhile to say about the grief parents in such a situation go through, or the sort of things that would drive someone to commit such crimes. The motivation for the child abductions is especially absurd, some hokum about "waging a war on God". Other aspects of the film are equally ridiculous - for example, apparently everyone in Pennsylvania ignores police cars that come barreling down the road with lights flashing. I know, we see that kind of nonsense in action movies all the time, but again, this is supposed to be a more serious film than that.


And if you're hoping for at least some interesting characters to make the film tolerable, forget it. The characters in PRISONERS are thinly written caricatures at best, and in some cases so underutilized as to beg the question of why they're even in the movie. At least Jackman's “going for the Oscar” scenery chewing, Dano and Dastmalchian's central-casting creepiness, and Gyllenhaal's twitchy intensity offer some entertainment value, but that's not exactly a compliment.

While the script and performances bear some of the blame, in the end the lion's share would seem to rest on director Denis Villeneuve's shoulders. After all, this is a talented cast, and it's up to the director to make sure they aren't going over the top or fading into the scenery. It's also ultimately up to the director to look at the script and recognize when things need to be pared down. If PRISONERS had been an hour and a half/hour and 45 minute straightforward action film, its implausibilities and absurdities wouldn't have grated nearly so much and it might even have been kind of fun. The intent, however, seems to have been to make a film more on a level with SILENCE OF THE LAMBS or GONE BABY GONE despite the fact that the material was in now way up to snuff, and that's simply a recipe for failure. 2 out of 4 stars