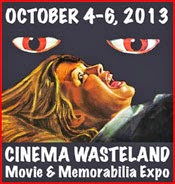 As we know, ever since LeBron James left the only thing significant about Cleveland is that it's not too far from Strongsville, Ohio - which is where Cinema Wasteland happens twice a year.

In the spirit of such movie-memorabilia and nostalgia expos as the Monster Bash in Pittsburgh and DragonCon in Atlanta, and the "HorrorHound" weekend, Cinema Wasteland is a fan gathering, film marathon, variety show and memorabilia expo at the Holiday Inn Select of Strongsville, devoted to what founder Ken Kish, of Berea, likes to call the "Drive-in and grindhouse era" cinema, roughly from the late 1950s to the late 1980s.

At Cinema Wasteland longtime connoisseurs of such entertainment turn out to meet and greet the stars, ask questions at panel discussions, enjoy revivals of the old classics, and dig into their wallets to buy, sell, trade and enjoy all that's edgy and oddball in the movies. As an added attraction local and regional filmmakers visit peddling their wares, TV horror hosts come from far and wide, hosting live Saturday-morning and Saturday-night schtick (with none of those annoying censors), and Holiday Inn room parties proliferate after hours.


For those of you snobs (East Siders, in other words) who think this sounds awfully sordid, consider putting on your reading list The Girl, the memoir by Samantha Geimer. Now middle-aged, she was for many years the nameless juvenile plaintiff in the statutory-rape case against revered artiste du cinema Roman Polanski (who sexually misused her at Jack Nicholson’s pad in 1977 when she was all of 13). Read her tale and ruminate on this: that most of the laborers in the B- and C-movie cesspits have likely had far less twisted backgrounds than so-called world-class filmmakers such as Polanski.

Thus, the central point of Cinema Wasteland this fall is a reunion of cast members from the original Wes Craven shock drama THE HILLS HAVE EYES, about the death struggle of a vacationing family from Cleveland against a rival clan of desert-dwelling degenerate mutants. It’s worth noting that THE HILLS HAVE EYES was also coincidentally, released in 1977. If only Roman-sleazebag-Polanski had hung around Craven’s sets and not young nymphets, Mr. Polanski would be somewhat less under indictment than he is now.

Further VIPs include frequent genre actor Stephen Macht, actress Donna Wilkes, makeup f/x specialist Tom Sullivan, fantasy-prone director William Sachs, and the one and only Chester Turner, a DIY filmmaker whose BLACK DEVIL DOLL FROM HELL became a cult favorite in the direct-to-VHS era. And adult-movie actress Seka. Who probably would have been a far wise choice of Roman Polanski’s for date material.

Plus expect a presentation by the one and only 42nd Street Pete about New York City's Times Square sleaze-pit scene of yesteryear; the Son of Ghoul hosting a Saturday festival of Three Stooges shorts (on genuine 16mm) and, of course, the tablesful of unspeakable schlock-film souvenirs and relics on sale, like books, soundtracks, posters (vintage and modern), cassettes, DVDs, laserdiscs and action figures.

Cinema Wasteland takes place at the Holiday Inn Select of
Strongsville, at 15471 Royalton Road. Dealer-room hours are Friday from 5 to 10 p.m., Saturday from 10 a.m. to 7 p.m., and Sunday 11 a.m. to 5 p.m.
Admission at the door is $20 per day, or you can buy at three-day $50 VIP pass. For more info check out the website www.cinemawasteland.com.
Posted by Charles Cassady Jr. at 1:04 AM