[LAPUTA: CASTLE IN THE SKY screens Friday September 6th at 7:00 p.m. and Saturday September 7th at 5:00 p.m. at the Cleveland Cinematheque.] 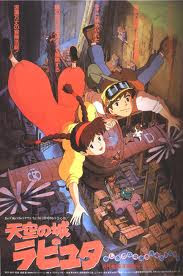 While I've got all your attention (yeah, right), let me just make this last comment - for the moment - on the Seymour Avenue horrors and the widely applauded suicide, so-called, of sex-criminal Ariel Castro. Just days before, much of this part of Ohio celebrated the 20th anniversary of the filming of the jailhouse drama THE SHAWSHANK REDEMPTION in and around Mansfield. If memory serves, a theme in THE SHAWSHANK REDEMPTION is a Hollywood-liberal notion that underneath their rough exteriors, hardcore maximum-security inmates are really good souls. They are, they are! You just have to have a guy like Tim Robbins serenading classical music in the exercise yard and stocking the prison library full of sensitive literature, and they become lambs.

Yes, audiences adore THE SHAWSHANK REDEMPTION and weep at the appropriate moments...Yet when a real-life notorious convict kills himself or gets killed/executed, not even a week later, and all the same hoi polloi give the high-fives and the "f__ yeahs!" and whatever bad Shane Black dialogue passes for macho affirmation these days. I'm just saying, it's an unusually sharp disconnect there. We cheer on Hollywoodized convicts played by Morgan Freeman; the real non-SAG ones offscreen may well be mass-lynched by vigilantes and Republican frat-boys. It's like BABE inspiring more pig roasts, is all I'm saying.

Another disconnect (trying to get the topic back on track) came back in 1986, with parental groups clamoring for decent, child-friendly animated entertainment, rather than the tired stuff a pre-LITTLE MERMAID Disney was serving up, or the cut-rate toy-line promos like TRANSFORMERS: THE MOVIE. Yet a series of now-classic cartoon film fantasies were reliably hailing out of Japan's Studio Ghibli, primarily masterminded by Hayao Miyazai. Though they broke box-office records in the Far East, almost none of the charming titles were accessible to western viewers for many years, except as bootleg VHS copies of laserdisc imports.

Many `otaku' fans consider Miyazaki's TENKU NO SHIRA LAPUTA, alias LAPUTA, CASTLE IN THE SKY to be the very best of the best. Eventually even the Walt Disney folks had to recognize Studio Ghibli's excellence (or they got a bargain price in Japan's nuclear-meltdown-economy), and starting in the 1990s LAPUTA, as well as other Ghibli titles done by Miyazaki's cohorts, got English-lingo re-releases. The dub jobs were at least professionally supervised and featured trendy name actors. The Cinematheque is showing a series of these, opening with LAPUTA this weekend.

And, while glorious to behold and occasionally stirring a genuine sense of wonder, I must respect the opinions of some eyewitnesses who say that the original three-hour Directors Cut of LAPUTA is awesomely breathtaking, while this abridgment is far inferior in comparison. Oh well, one takes what one can get.

The setting is a vaguely European alternate-world early-20th century - say, one in which commuter biplanes and flying machines are as commonplace among the countryfolk as were Model-T Fords, the aircraft more important than the roadways. In this land there exists a legend of a fabulous flying fortress called Laputa, laden with treasure, robots, and powerful weapons.

Pazu (voiced by James Van Der Beek) is a brave young orphan working the mines, when a mystery girl literally floats down from the sky to him (the motif of a heroine making an entrance floating down/falling from the sky has been done so often in Japanimation that some otaku will have to school me: did that all start with this film, or is it some folk-archetype thing? Or maybe Japanese young males actually believe that's where their potential girlfriends come from? Either that or out of vending machines, I could believe it).

Anyway, the gravity-defying female is Sheeta (voiced by Anna Paquin), an amnesiac with an heirloom amulet crystal. She is chased by both government forces and a family of sky pirates, as she is considered a clue to the whereabouts of Laputa, a place that Pazu's father once distantly glimpsed and photographed. As Pazu and Sheeta save each other repeatedly, they come into a curious alliance with the soft-hearted sky pirates, a family business led by the formidable granny-like scalawag Ma Dola (voiced by Cloris Leachman).

Visuals are breathtaking, even if the main characters lack depth. Pazu is a bold and brave orphan, Sheeta is a bold and brave orphan, etc. Our heroine also tends to suffer wholesale memory loss at some points, while at others she can recall magic spells and the not-insignificant detail that she happens to be a long-lost Laputian princess, but possibly didn't think it worth mentioning. And the coolest voiceover, at least in concept for me, was Mark Hamill as the villain, a power-hungry spymaster. I dig that Hamill found a post-Luke Skywalker niche as a star voiceover actor, even if the US has a bit of a way to go to match Japan, where voice thespians are renown.

A nature-loving plot twist that saves the heroes from doom in the apocalyptic third act seems to come out of nowhere (though reverence for the natural world is a Miyazaki trademark). I might assume in my ignorance that the full three-hour LAPUTA is far better, broader and layered deeper in building its mythology. Yes, the bit about a giant, high-tech flying city-castle was inspired by the later chapters of Gulliver's Travels, the part after Gulliver leaves Lilliput. Of course, for author Jonathan Swift it was a stage-setting for a sourly imagined society of ineffectual scientists and doltish intellectuals. None of that comes through here. And that's okay; it's Miyazaki's wonderful world, and we just get live in it. For a time. But the longer a time, the better the movie, evidently, and this one's the shorter version. (3 out of 4 stars)