It's a Disaster (now on video)

[IT'S A DISASTER is now available on home video.] 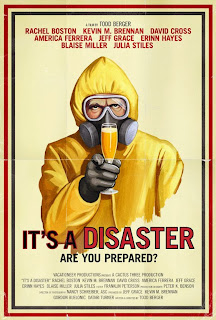 Wow, writer-director Todd Berger, you're tempting fate by calling your movie IT'S A DISASTER. That's an invitation to critics hitting the production with a regular bombardment of insults, all right. IT'S A DISASTER really isn't a disaster, although for me it had something of the vibe akin to a lot of the smugly forgettable American indie entries at the Cleveland International Film Festival. You know, it's intelligent and quirky but overall leaves an empty, wow-I-could'a-had-a-V8 feeling. And I have the sad impression I personally elicit the same reactions from people, so I really should go easy on the picture.

The premise is not entirely original, a worst-case-scenario apocalypse from the POV of a small band of helpless, hapless characters. One can find antecedents to that in everything from MIRACLE MILE and ONE NIGHT STAND (an Australia picture about thermonuclear war) to CLOVERFIELD. Berger, however, wants to combine post 9/11 terror angst with an ensemble relationship comedy.

Young marrieds Pete (Blaise Miller) and Emma (Erinn Hayes) have been having "couples brunches" for some time now, inviting their longstanding circle of friends. For this particular occasion, however, they plan to use the occasion to announce (after dessert) their impending separation and divorce. But the agenda is disrupted when cellular communications and internet fail all at once (noticed by nerdy guest Shane, who is trying to buy a rare X-Men comic in an online auction). It seems that terrorist-type strikes have taken place at the nearest city, and at several US cities, in fact.

Kind of like September 11, only funnier. Hopefully funnier, at least. Trouble is, it's about a decade past the sell-by date for something of that nature to be really shocking and provocative. Absent of any fancy f/x, this bomb-shelter comedy-of-manners approach has the ensemble sealed inside Pete and Emma's suburban home, cut off from virtually all outside communication, trying to deal with what appears to be impending doom. And finding out, in the meantime, who's been sleeping with whom on the side.

Funnier moments include the couples discovering that Pete and Emma, always on top of the latest Web-based new-media audio gadgets, don't seem to own anything as simple as a basic AM/FM-band radio to find out what the disaster actually is or what civil authorities or the Emergency Broadcast System recommends.

There's also a late revelation that's literally a Revelation - that one of the more level-headed guests is actually a Christian true believer who is sure this is all a prelude to the Rapture. I won't spoil things by telling you more, and that's okay because the joke's payoff is pretty weak. And that's not so okay, because it's also the movie's payoff. Remember [SPOILER ALERT] how The Sopranos finished up. Well, sort of like that. Maybe exactly like that.