Into the Night (September 26th at the Akron Art Museum)

[Into the Night screens Thursday September 26th as part of program of short films at Akron Film + Pixel Night at the Akron Art Museum starting at 6:30 pm.] 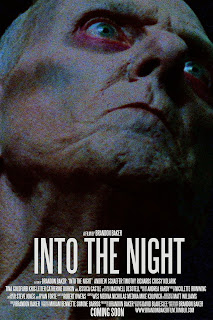 A married man contemplates the ramifications of his unfaithfulness on his wife and young daughter in Into the Night, the latest short from Cleveland area filmmaker Brandon Baker. As with his previous work, the visuals and use of sound design are strong, but this time there's more empahsis on character and dialog than in the two shorts of Baker's I've seen previously (The Artist and The Accident). The acting is a mixed bag, but generally stronger than in The Artist, with lead Andrew Schaefer coming across much better than the “friends willing to work for free” level of acting one usually finds in productions of this level.


The general vibe I got from the short is like a Twilight Zone episode directed by an experimental filmmaker. I was also reminded a bit of Dickens 'A Christmas Carol' in the way a spirit (at least that's what I thought it was) tries to warn the protagonist to change his ways. The arty, surreal approach can be a bit obtuse at times, and I wasn't entirely clear on what the ending meant, but overall this is a solid piece of work by a talented filmmaker. 2 1/2 out of 4 stars.
Posted by Bob Ignizio at 12:00 AM