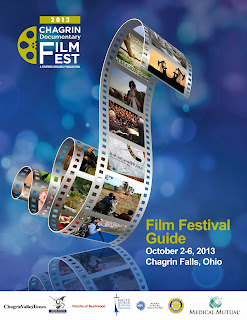 Ever since LeBron left, the only thing significant about Cleveland, we can all agree, is its close proximity to Chagrin Falls, hometown of Tim Conway, National Lampoon eminence Doug Kenny, and "Calvin & Hobbes" cartoonist Bill Watterson.

And for four years now, Chagrin Falls has also been host to the Chagrin Documentary Film Festival, the region's only film festival uniquely devoted to nonfiction features and shorts. It's a must on any local film fans' itinerary.

The CDFF takes place from Wednesday, Oct. 2, through Sunday, Oct. 6, at venues throughout the famously postcard-pretty village of Chagrin Falls on the eastern side of Cuyahoga County. Screening sites range from the venerable old Township Hall on Main Street to the Chagrin Valley Little Theater and the Federated Church.

Speaking of cartoonist Bill Watterson, the publicity-shy, best-selling artist-writer is the absentee subject/star of DEAR MR. WATTERSON, the showcase opening-day film, screening at the Little Theater on 7 p.m.

Filmmaker Joel Allen Schroeder, a C&H super-fan, treks to Chagrin and vast comics archives at Ohio State - not to stalk the mysterious, retiring Watterson in the fashion of past documentaries such as ROGER & ME and WAITING FOR FIDEL but rather to use Calvin & Hobbes as a gateway to explore readers' longstanding love affair with characters and narratives of ever-shrinking newsprint funny pages, of which Watterson’s might have been the very last masterwork.

No, Mr. Watterson is not expected to attend this screening. Filling in for him will be authors J.D. Salinger,  Harper Lee and Thomas Pynchon. Okay, just kidding about that last part; they won’t be there either. But other VIP guests and filmmakers are expected to drop in for the duration. A "Red Carpet Gala" on Saturday night at 7 p.m. at the South Franklin Circle (16575 S. Franklin St.) brings out filmmakers in person, live entertainment, a silent auction and other goodies.

At 3 p.m. on Friday, Oct. 4, a panel discussion at the popular (and slightly movie-themed) restaurant Rick’s Café looks into what goes into the making of a documentary.

One should not overlook the Sunday, Oct. 6, 12 p.m. program at the Little Theatre of short subjects done by local filmmakers. One of the titles is the half-hour THE LOST SPARROWS OF ROODEPORT, made by about a church-run orphanage and AIDS hospice in South Africa. The filmmaker, Chagrin Falls native David Ponce, died at 20 of leukemia in 2006 during post-production, and his family founded the Chagrin Documentary Film Festival in his honor, and to continue telling stories from around the world through the medium he loved best, nonfiction film. It will be followed by the “Best of the Fest” winners by audience vote.

The Holocaust documentary DEFIANT REQUIEM, closing the festival at 5 p.m. on Oct. 6, will show at the Federated Church at 76 Bell Street, accompanied by a live choral performance of a selection from Verdi’s Requiem Mass - most pertinent to the film, about musicians at the Terezinstadt concentration camp. It’s a special tie-in with the Maltz Museum of Jewish Heritage.

Tickets to non special-event features and feature-length short-subject bundles are $10 and can be purchased in advance at three locations: Chagrin Falls Township Hall (during 11 am to 3 pm.) at 83 North Main St., the 1st Federal of Lakewood bank branch at 2 E. Washington St., and the PNC Bank at 34 N. Main St, all in Chagrin Falls, and via the festival website. Other payment plans are available, right up to the all-access-plus-Opening-Night festival pass of $80. For full information and schedules, go online to www.chagrindocumentaryfilmfestival.org.
Posted by Charles Cassady Jr. at 12:00 AM