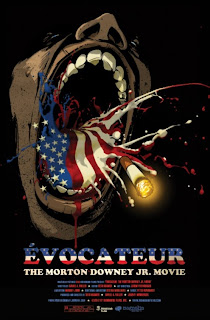 I understand there will be some filmmaker personal appearances when EVOCATEUR screens at the Art Museum [Note: the appearance has been cancelled, but not the movie.]. Not to incur any liability or anything for the Blog, but it would be fab if the audience, whom I would imagine are typical University Circle rabble, did a whole riot scene and started throwing chairs around. Again, I am not saying I want that to happen, just that it would be appropriate. And if it does happen, the police and lawyers should spell my name right: it's E-B-E-R-T...

Via witnesses, commentators and surreal animation, EVOCATEUR tells of the very public rise and steep fall of schlock-TV phenom Morton Downey Jr., whose syndicated talk show was a milestone in "trash TV" and had critics at the time wondering if the grim satire of NETWORK had come true. Filmmakers Seth Kramer, Daniel A. Miller, Jeremy Newberger employ a retro pre-digital style I quite enjoyed - through more reminiscent of the 1970s than the late 1980s where most of this went down.

To judge from the posts of this movie the IMDB (which gives it a shockingly low rating, BTW), most of today’s internet kids, probably hired over me for all the  high-paying social media/arts/communications gigs, have zero idea who Morton Downey Jr. (1932-2001) was. They’re probably really angry when they see this movie to find out it isn’t the guy who plays Iron Man after all. But I quite remember Morton Downey's show on the air shortly after I graduated and started looking for a "job" in the Cleveland area (yes, good luck with that, younger Charles). With The Morton Downey Jr. Show airing in Cleveland, I was grateful I hadn't majored in the cesspit that was broadcast journalism, but had rather gone for the more refined, respectable newspaper end.

Now newspapers are dead/dying. And I am still looking for a real job. No wonder I want to see riots now, and chairs thrown at filmmakers (lots of filmmaker deserve it anyhow).

Downey Jr. was second-generation showbiz, son of celebrated "Irish Tenor" crooner Morton Downey Sr. Evidently the elder Downey was big enough to make Hollywood movies and the cover of Time, but here he is depicted (sometimes in animation) as a cold, disapproving, toad-faced parent whom junior blamed for his actress-mother Barbara Bennett's chronic alcoholism and death.

Raised in luxury after Bennett lost the custody battle, Downey Jr. groped for a life that would overshadow his dad - there's a clip here from something I never imagined existed, an "Idol"-type TV show of B&W yesteryear with the young Morton trying to sing - and being told by Ohio's own Dean Martin that he's not up to Downey Sr.'s standards and needs to work on it more. Really, Dean Martin doing Simon Cowell, like some kind of post-modern comedy sketch with perfect CGI simulacra. That moment is almost worth the cost of admission alone.

After going through a quasi-hippie phase, Downey Jr. finally found big-time celebrity as a combative, right-wing TV talk-show host, sort of the anti-Phil Donahue. Interviewee Sally Jessy Raphael (do you IMDB kids recognize ANY of these names, or does your pop-culture awareness sort of start with HIGH SCHOOL MUSICAL?) says the guy shamelessly stole the act of pre-existing blowhard Joe Pyne. And sharp-eyed viewers will also recognize another TV fire-breather, California's Wally George. Downey Jr. took their already over-the-top schtick and pumped it up more, taping his syndicated show in blue-collar Secaucus, New Jersey. The audience was filled with rowdy guidos and teenage boys, whipped into a frenzy with Downey's trademark chainsmoking, sexism, guest strippers and hyper-patriotic rants against "pablum-puking liberals"

This made Junior the top of the ratings trash-heap for a short while (he was even interviewed by Ted Koppel - another person you internet kids probably will have to look up on Wikipedia), and he divorced his third wife - we're told he shed his wives like clockwork, every 13 years - took up with a sexy blonde, and did live-on-the-road shows, complete with a CD of music. But advertisers were losing interest in having the Morton Downey Jr. Show audience being their demographic, and the gimmick was wearing thin. Then the host, in a public restroom, deliberately faked his own beating by "Nazi" skinheads, a final grasp at PR relevance that went badly wrong and effectively ended his show. The revelation here is that Downey Jr. took cues from the Tawana Brawley assault hoax, a scandal Downey Jr. and frequent guest Rev. Al Sharpton exploited together.

Sharpton could build a career out of such stuff; Morton Downey Jr. didn't. The documentary doesn't mention, alas, Morton's brief run as a character actor in direct-to-video B- and C-movies, but goes right to his death from lung cancer, when he attempted to made amends with liberals in Kennedy country with whom he had grown up.

Yes, even with an approving Pat Buchanan interviewed and line drawn from Morton Downey Jr. to Glenn Back and the Tea Party, the film makes a case that Downey's "evolution" to conservative Neanderthal was a fiction put on for ratings, ego, stardom and Getting Even With Dad. Most of the show's old producers, even some audience members, are interviewed; they don't seem to have any regrets about their achievements - money-wise, especially - and we're informed the show opened up America's eyes to the hitherto-neglected Jersey Shores type of personality. As though that were a good thing. One individual not interviewed, sadly: Cincinnati's pride and joy Jerry Springer, who has been the king of talk-TV slime ever since, but whose "ringmaster" approach is vastly different. I'm told Mr. Springer can be a quite charming and accessible person, and he really would have been a valuable voice in this lurid inquest. You Art Museum audiences, be sure to riot and scream about that omission.

The big issue: Much as Morton Downey Jr. projected a pretty odious public image, does this film actually humanize him? To the extent it does is thanks to a real find, obscure poetry published by young Downey in 1969, here read by his contemporaries (like comedian Chris Elliot) that seems to comment prophetically on the author's angst, rise and fall.

This is the longest review I've written in quite a while, so I guess you can say that I'm pretty fascinated by the movie, even as I had many problems with it. Viewers of my generation, who want to remember this weird episode in the decline of American media and civility, should check it out indeed. The ROCKY HORROR PICTURE SHOW closing credit sequence is a work of art all by itself. You internet/IMDB kids, you have heard of ROCKY HORROR PICTURE SHOW, right? Otherwise the reference will be lost on you. (3 1/4 out of 4 stars)