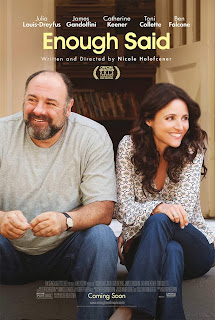 Every once and a while a film comes along that is non-offensive, that is understated, a film that simply exists. These types of films, in the scope of cinema, are immune to either praise or extensive critique. ENOUGH SAID, a film by Nicole Holofcener, who has been involved in directing some of the hottest shows on television, is one such film.

The film revolves around two middle aged, divorced parents who are in the same place in their lives. Eva, played by Julia Louis-Dreyfus (SEINFELD, VEEP) and Albert played by James Gandolfini (THE SOPRANOS, ZERO DARK THIRTY) are both losing their daughters to college in a few months and both are reluctantly seeking someone to be with.

The two meet at a party where neither is attracted to anyone there, this is their first connection and sign that maybe they’re right for each other. The dilemma in the film is not the character quirks of our two leads (which there are many), but that Albert’s ex-wife and poet, Marianne (Catherine Keener), has, unknowingly to all involved, also become friends with Eva. As Marianne rails against her ex-husband, who is fat, sloppy and not ambitious enough, Eva puts together the pieces.

ENOUGH SAID has other loose ends which help fill the film with content, but not always substance. The relationship between Eva and her daughter’s friend, Chloe, often causes conflict with her own daughter, Maddy, because Chloe spends more time with Eva than Maddy does. Eva’s friends Sarah (Toni Collette) and Will (Ben Falcone), who seem to have a love/hate marriage (mostly hate), are around mostly for comic relief. Albert’s daughter, Tess, seems to be rude and self-centered, but ultimately adds little to the mix.

While the film doesn’t always offer purpose, it does offer chemistry. The casting of Louis-Dreyfus and Gandolfini as an odd pairing works perfectly. It works because of the writing, it works because of the acting, but like all great Hollywood romances, it works because of undeniable chemistry. The film effortlessly allows us to believe that these two are a match and it feels easy to root for them. Both actors have thrived on careers in which they make whatever they’re doing look and feel real. The film only cements the tragic loss of an actor like James Gandolfini, who passed away earlier this year.

As a romantic comedy, which would be a safe label for it, it works. It’s charming, often funny and pulls at your heartstrings. It follows a line of recent romance films that are more founded in realism than typical Hollywood romances of old. While these are still white-upper middle class Americans, the film does it best to feel blue collar.

Ultimately, it’s a film that neither overachieves nor underachieves. It will please many and bore some. It becomes almost immediately clear that it’s not a film looking to break new ground or even tell a new type of story. It thrives solely on the heart of our two leads, and in this case that seems like just enough. 2 1/2 out of 4 stars.
Posted by Joseph Anthony at 12:00 AM