Elysium: The Art of the Film 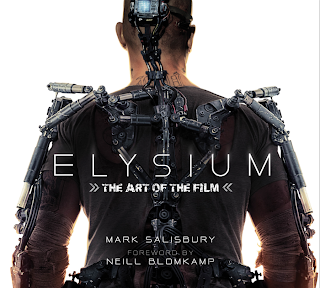 South African director Neill Blomkamp first turned heads (and a few stomachs) with 2009’s sci-fi segregation film DISTRICT 9.  For his latest picture, ELYSIUM, the visionary young filmmaker tackles immigration and wealth discrepancy in a dystopian future where Earth’s upper class citizens stare down on the ruined planet from their idyllic homes on an orbiting space station.

We’ve seen this kind of thing dozens of times over the years in literature and film—the concept of an everyman or some antihero rebelling against the corrupt powers that rule a tainted Tomorrow Land.  Moviegoers have perennially anteed up top dollar for sci-fi message pictures, from METROPOLIS to THE HUNGER GAMES, and today’s computer technology allows filmmakers to convincingly create exciting new worlds that yesterday’s directors could only dream of putting on the big screen.

“People always say film is a combination of all the arts,” Blomkamp notes in the foreword of ELYSIUM:  THE ART OF THE FILM.

Available now from Titan, the oversized, 170-page scrapbook collects tons of eye-popping conceptual art from ELYSIUM into a single volume science fiction aficionados will drool over.

Mark Salisbury—who’s acted as curator of production art for books on PROMETHEUS, FRANKENWEENIE, and other films—assembles a hefty sampling of the 3,000 pieces of design art produced for Blomkamp’s sophomore effort.  The illustration talents of Aaron Beck, Leri Greer, Christian Pearce, and Ben Mauro feature heavily, and production designer Phil Ivey and acclaimed “futurist” consultant Syd Mead (ALIENS, TRON) discuss their contributions to the movie’s rough-and-tumble robot environs.
The book is split in two, with one half devoted to each of the film’s main settings:  Earth (or—more specifically—the overpopulated, impoverished “favela” of 2159 Los Angeles), and the luxurious rotating space sanctuary of Elysium.  Salisbury offers a treasure trove of drawings, watercolors, storyboards, and stills imagining all the sets, characters, vehicles, and other props seen in the movie before cameras started rolling.  And Blomkamp himself rubber-stamped them all.

There’s plenty to look at, but the accompanying text discloses why Blomkamp opted to shoot in grimier parts of Mexico City rather than return to Johannesburg, where he made DISTRICT 9.  We discover how the director achieved cinematic separation between Earth and Elysium by shooting the L.A. sequences in hand-held style, then capturing all Elysium’s frames with cameras mounted on conventional cranes and smooth-gliding dolly tracks.  We peek inside early designs for Max’s decrepit apartment (created on a Vancouver set), whose open toilet and filthy walls “reinforce his dodgy past,” and learn Image, Inc. FX supervisor Peter Muyzers brought Spider’s repurposed space shuttles to life. Real-life gang members were hired to ensure all the graffiti seen in the movie was authentic, but makeup artists (and WETA computer techs) designed the film’s myriad tattoos.

Salisbury introduces readers to ELYSIUM’s many robots—from the goofy, static parole officers cast in fairground-style fiberglass—to the hazmat automatons rolling through the Armadyne factory and the militant police robots and “Homeland Defense Force” troops in full riot gear.  Behind-the-scenes photos reveal grey-suited actors and stuntmen standing in for the CGI robots, their body movements used as reference points for interaction and lighting.  Blomkamp explains that all his robots are faceless (save the parole officers) because the visual emphasis on “optics and surveillance technology.”

Along with the robots, the book’s complement of vehicle and weapon-centric artwork provides the bulk of the eye candy.  We’re given sneak peeks at Pearce’s sleek spaceship illustrations and Beck’s exoskeleton prototypes (each piece milled in urethane).  We’re told Armadyne CEO Carlyle’s fancy shuttle was modeled after “the most exclusive car brand” anyone could think of—Bugatti—and that Kruger’s “Raven” shuttle was based on a black hawk helicopter.  The assortment of weapons may look futuristic on film, but they were designed to look antique by 2159 standards, from Max’s electromagnetic “Chemrail” coil gun to Kruger’s “4-Sure” missile launcher.

Devoted to Elysium’s interior and exterior, the book’s second half is chock-filled with storyboards and concept paintings that appear so real you’d insist they were photographs.  Sidebars and captions explain how Blomkamp and company studied hundreds of images spacecraft and satellites on NASA’s website in order to faithfully render the “Stanford Torus” spinning wheel that is Elysium.  The rotating station has an open, pressurized roof—the idea being that centrifugal force would keep the artificial atmosphere locked inside.  Blomkamp says they settled on five “bicycle spokes” for Elysium simply because “We’ve already seen four” in Stanley Kubrick’s 2001: A SPACE ODYSSEY.  Inside, the station was made to look like “Bel Air in space”—an orbital suburb with mansions and tennis courts for Earth’s affluent escapees.

The 3-4 pages on Max's "ghetto surgery" are neat, but might gross out house guests who accidentally thumb to said section while flipping through the coffee-table keepsake.  Salisbury lays out sketches and models depicting the grisly procedure, during which Damon's rebel has a prosthetic skeleton bolted to his actual bones and a computer hard drive / USB port implanted in his skull (which is exposed).

Some of the artwork is pragmatic, but no less striking:  WETA designer Leri Greer came up with hundreds of fake logos to slap on the countless robots and appliances littering the film’s corporation-controlled society.