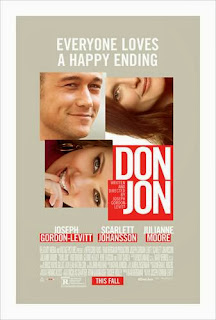 My screening of actor Joseph Gordon-Levitt’s first big screen writing/directing/starring venture DON JON boasted the second most walk-outs I’ve witnessed at a movie this year. Having stayed for the entire film, it’s hard to imagine how such an on-the-nose, caricature-driven critique of romance and sex in pop culture could evoke such a degree of boredom or disgust.

Levitt is a capable director, but even more assertive and decisive as an editor. DON JON is a supremely rhythmic film following Jon through a weekly routine that takes him from car to church to club to bed, repeatedly giving way to rapid-fire montages of heaving breasts, gyrating asses and ecstatic, groaning mouths all flitting faster and faster before Jon’s glassy, insatiable eyes.

Sure, the message is about as a subtle as a sex tape, but there’s something about the delivery – Levitt’s unapologetic deployment of the Jersey Shore archetype, cartoon versions of human beings who are distorted to reflect their own warped expectations of relationships, both romantic and platonic – that’s intriguing.

Then there’s Jon’s weekly church attendance – interesting how the character’s post-confession absolution isn’t a break from his vicious cycle of addiction, but rather a critical phase within it.

I should also probably mention that Julianne Moore is under-used and the ending is criminally rushed.

Oh – and if you were curious as to the movie I attended with the most walk-outs, that was Harmony Korine’s sweaty, sternum-rattling SPRING BREAKERS, a film I don’t necessarily want to compare to DON JON because they are very different in both narrative and tone, and yet… both are visually rhythmic dark films marketed as artsy comedies featuring big-name actors playing trashy stereotypes, and both hinge on characters shaped and, ultimately, twisted by their obsessions with American fantasies as violently refracted through the lens of pop culture. Also, boobs and butts.


And though, like SPRING BREAKERS, DON JON is a film I respected more than I outright enjoyed, it’s certainly a worthwhile watch (3 out 4 Stars)
Posted by Matt Finley at 12:01 AM