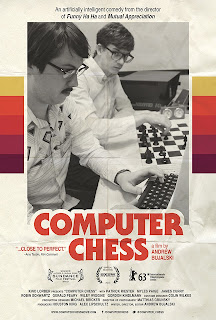 Like many subcultures, the computer nerd tends to be reduced to a shallow, easily digestible comic relief stereotype when appearing in the movies. That's not the case with COMPUTER CHESS, in which socially awkward but brilliant computer programmers gather for a contest some time in the early eighties to see whose computer chess program is the best. The victor will then face off against a human chess master to see if man can still maintain his superiority over machine.

There's not really much of a plot; the film just sort of wanders about the hotel where the contestants are staying. Shot mostly in black and white, the film at times seems to be taking a mockumentary approach. But then there are scenes that clearly aren't meant to be documentary footage that come across more like the sort of ultra low budget shot-on-video semi-pro cinema that makes CLERKS look like a slick Hollywood production. And then there are the film's odd digressions into metaphysical, psychedelic, and science fiction territories. The various ideas and styles don't always mesh well together, and it can be a bit of a chore to watch at times.


And yet, COMPUTER CHESS is not without its charms. Especially for those who have at least a passing familiarity with the world of pre-internet computer nerds, there's much here that will ring true. Getting the haircuts, clothing, and glasses right is easy, but accurately capturing the subtle nuances of the true geek speak and mannerisms of stoned computer programmers waxing philosophical is another story. There are some moments that just seem weird for weird's sake, but there's also a lot of genuinely funny stuff, and even a little pathos.


I'm torn between thinking the shoddy technical filmmaking aspects are intentional or not. Given that the caliber of acting here is way above what one finds in just about any other film on this technical level, I'm inclined to believe this was an intentional aesthetic choice. The mockumentary aspects work fairly well, but the rest of the film can become grating. Still, there's enough here that works to make the COMPUTER CHESS worth a watch for those interested in the premise. 2 1/2 out of 4 stars.