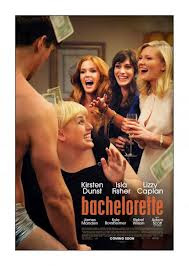 When Kristin Wiig announced that she would not do a sequel to her critical and commercial hit BRIDESMAIDS, she rose in my esteem equal to Burma's Aung San Su-Kiy (now we'll just have to have a sudden-death swimsuit or wet-T-shirt competition to choose between them).

Still, I do fear for the safety of this courageous and endangered international heroine - Kristin Wiig, I mean. You know just how much money there could have been in a BRIDESMAIDS II? BRIDESMAIDS 3 IN 3D? BAD-NEWS BRIDESMAIDS GO TO JAPAN? The inevitable BRIDESMAIDS TV series? Don't be surprised, I'm just saying, if Kristin Wiig is found dead one of these days, shot/dismembered/stabbed/strangled and blown up. The LA County Coroner will rule natural causes or suicide, and next year's summer hit MUPPET BRIDESMAIDS GO DOWN UNDER FOR A HAROLD & KUMAR CHRISTMAS will be dedicated to her memory.

Of course, rival studios can always do their part to save Kristin Wiig's life (or just make money, which is all movie folk really care about) with lookalike girls-behaving-badly farces, such as BACHELORETTE. An asterisk may be in order; much as it looks like a brazen 2012 BRIDESMAIDS clone, BACHELORETTE gets opportunistic points for actually being a pre-existing Off-Broadway play, adapted and directed (a decent job of mise-en-scene for a first-timer) by screenwriter/playwright Leslye Headland.
Still, Harold Pinter can rest easy, as this footlights-to-film transubstantiation just begs for another title: "Hangoverette."

Regan (Kirsten Dunst) is a highly wound high-achiever, acting as maid-of-honor in the New York City wedding of friend Becky (Rebel Wilson). Despite her plus-sized physiognomy and nickname "pigface," Becky turns out first of her high-school class of 1999 clique to actually find some guy eager to marry her. The others in their quartet of BFFs, Gena (Lizzy Caplan) and Katie (Isla Fisher) are two promiscuous, coked-up party-girl types. Forget the HANGOVER joke; subtitle for this deserves to be "People Who Always Get Hired Instead of You in the Cleveland Job Market."

The girls throw a bachelorette party with a male stripper that goes badly awry, and in the boozy aftermath Gena and Katie accidentally tear Becky's prized wedding dress. The bulk of the picture is their predawn-hour quest, as a guilt-ridden Regan, Gena and Katie dash around Manhattan desperately trying to repair the damage - and, with somewhat less than complete success, to avoid the open-all-nite temptations of drugs, alcohol, strip clubs (there's no nudity, but swearing and sex talk earns the R) and the distraction posed by bad old boyfriends and other males in the wedding party.

Okay performances, an energetic narrative and occasional flickers of insight and gravitas make this more than just a rote slobette comedy a la WEDDING CRASHERS. Of course, PORKY'S had all that too). Still, much as "third wave feminism" - speaking of bad sequels - means pretty girls in movies now have just as much right as a Vince Vaughn or Zach Galafianakis character to be an, uh, asshole-ette, one would think twice before being in the room with any of these characters for any prolonged span of time, so let that rule your viewing choices. Wow...MUPPET BRIDESMAIDS GO DOWN UNDER FOR A HAROLD & KUMAR CHRISTMAS...I used to be a nice Catholic boy; how can I think such abominations now? (2 1/4 out of 4 stars)