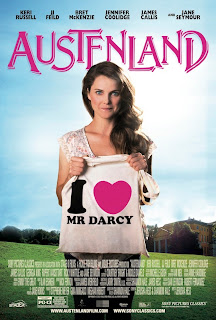 I'll be honest: I never really got the obsession with Jane Austen. I read the novels required in high school and college – Pride and Prejudice, Northanger Abbey, some others I've forgotten — and found nothing magical in their themes of love and courtship among the landed gentry and genteel poor in 18th-century England. I realize Austen's prose is prized for its ironic tone and wry view of marriage as a way of elevating a young woman's social standing, but if I want social satire, I'll take Anita Loos. I have never been a fan of costume drama, and the “Janeite” cult that has spawned innumerable Austen film adaptations and meta-books and movies about women obsessed with Austen, eludes me.

I can understand, though, why Jane Hayes, the heroine of AUSTENLAND, is fixated on Austen's novels, in particular the aloof romantic ideal of Mr. Darcy as portrayed by Colin Firth in the BBC adaptation of Pride and Prejudice. Jane (charming Keri Russell of Waitress) is in her thirties, unmarried, and all her boyfriends have been disappointing. None of them, of course, can compare to the fictional Fitzwilliam Darcy, a life-size cardboard standup of whom — in the guise of the chin-challenged Colin Firth — stands proudly in Jane's frilly, Austen-bedecked bedroom. So frustrated by Jane's fixation is one suitor that he hauls off and punches Firth's smug paperboard face.

AUSTENLAND is adapted from Shannon Hale's novel of the same title, a breezy “chick lit” story that has Jane Hayes inheriting from her wealthy aunt a paid trip to Austenland, a kind of Jane Austen theme park offering an immersive “Austen experience” at an English country estate, complete with Regency gowns and manners, pheasant hunting, needlepoint, games of whist, and a simulated romantic happy ending with one of several hired actors. The movie was directed and co-scripted (with the book's author) by Jerusha Hess, creator with husband Jared Hess of NAPOLEON DYNAMITE, and the pairing of her absurdist sensibility with the novel's light premise is promising. Humorous energy pervades the opening, which dispenses with the story of Jane's aunt's bequest and has Jane, in romantic desperation, spending her last dollar on the Austenland adventure, with the help of a sleazy-looking travel agent reminiscent of NAPOLEON DYNAMITE's stuck-in-the-'70s uncle.

Hess' absurdist style surrenders all too quickly to bland silliness as we meet Jane's fellow Austenland visitor, a blowsy middle-aged doyenne calling herself “Miss Elizabeth Charming.” Elizabeth, who is looking for sexy fun rather than an Austen experience, is played by Jennifer Coolidge, whose outsize manner and looks have added amusing punctuation to several Christopher Guest comedies. Coolidge's character here, spouting witless lines in a stagy Eliza Doolittle accent, is cartoonish rather than funny, though I did laugh when she gushed, “Look, a car from the 1800s!”

Elizabeth and Jane are whisked off to the estate and Jane learns from the evil proprietess, Mrs. Wattelsbrook (Jane Seymour), that because she's paid only for the basic package, her accommodations are considerably more humble than the others guests'. Each client is given a scripted narrative, and Jane, owing to her lack of funds, is cruelly cast as “an orphan of no fortune.” She's dubbed “Miss Erstwhile” — another way of saying “has-been” — and relegated to sleeping in the servants' quarters and wearing drab gray gowns. Jane's experience, it seems, is to be more Jane Eyre than Jane Austen.

The gentlemen who populate this fantasy retreat are Col. Andrews (James Callis), Mr. Wattlesbrook (Rupert Vansittart), the proprietess' old, libidinous husband; and Mr. Henry Nobley (JJ Feild), the supercilious “Mr. Darcy” type. Jane, ostracized by the other guests and players, takes her romantic fantasy where she finds it, in the arms of the stable hand, Martin (Bret McKenzie). Jane thinks she's having a defiant“off-plan” romance as Martin shares with her his love of Billy Ocean songs and enables her to witness the birth of a foal — “the miracle of life” he says in his New Zealand accent that Jane somehow mistakes for British. After enlisting Elizabeth to fancy up her hair and gowns, Jane becomes an object of desire, pursued by some of the other actors, including Mr. Nobley. Who is real and who is acting in what Nobley calls “a dangerous game”? In this story, the lines between fiction and reality are blurred.

The funny movie that resides in this premise, suggested by a goofy end-credits sequence set to Nelly's “Hot in Here,” is never quite realized. The film is wobbily paced and only fitfully amusing, relying too heavily on Coolidge's malapropisms and heaving bosom. And yet the movie has its charms – a likeable cast, a zesty spirit and a romantic optimism that's balm for the spiritually wounded.  2 1/2 out of 4 stars.
Posted by Pamela Zoslov at 12:01 AM