At the Gate of the Ghost (now on video)


[AT THE GATE OF THE GHOST is now available on home video.] 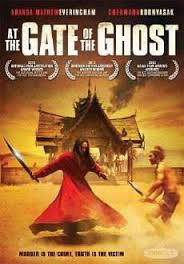 I meant to see JOBS at the theaters this summer, if only to write it up for the Blog and to use a lot of crippled-US-economy bleak jokes, making double entendres on the surname of the deceased Steve Jobs: "No more Jobs. I already knew that." "We used to have Jobs. We don't anymore, sorry." "No matter how much expensive college you get, Jobs interviews won't be possible for you." And so on. It never gets old for me.

But JOBS, with all its hype, came and went through theaters faster than, well, the Apple Lisa died in the marketplace (part of my interest in even seeing the movie was to check out if anyone came up with a working Lisa as a prop; anyone know?).

I have no idea if JOBS, then, was any good - I know Steve Wozniak disliked it. Then again, when the movie called WOZNIAK comes out, I won't be able to do a thing with that title.

I'd be sorely disappointed if JOBS was anywhere near a good as AT THE GATE OF THE GHOST, a sumptuous Thai production that's had little exposure in US theaters, strangely enough (while a Thai movie that wasn't even half-finished, MEKONG HOTEL, actually played Cleveland; WTF?). AT THE GATE OF THE GHOST is the umpteenth dramatization of the famous Japanese short story "In a Grove" - better known for its iconic Akira Kurosawa film adaptation RASHOMON.

In the year 1567, a warlord-prince and his beautiful but peasant-born wife are ambushed by a notorious forest bandit. The woman is raped and the warlord found stabbed to death. At a tribunal held before the local governor, however, the three main witnesses - the captured bandit, the woman and (via spirit-medium shamaness) the dead man - give vastly contradictory testimony about what actually happened. Each, mystifyingly, implicates himself or herself. So who is guilty?

RASHOMON has been ransacked by westerners for everything from the kiddie CGI comedy HOODWINKED to a really clunky Americanized remake called IRON MAZE to an "All in the Family" episode. But this sumptuous 2011 edition (actually itself translated from a stage version, if I'm reading the credits correctly) does the source material honor, even if it skews an existential-dread narrative (is there absolute Truth about anything?) more towards the religious precepts of Lord Buddha. Which are sung out over the opening credits, lest anyone miss the point. Moreover, the central story is bookended somewhat awkwardly around a drama of a saintly young monk suffering a crisis of faith, who gets shelter in a cave along with a gruesomely deformed undertaker and parses the murder tale for meaning.

It's still a well-mounted and grand bit of thoughtful entertainment; don't be put off by box art that makes the whole thing look like martial arts (but there is some great swordfighting...and some terrible swordfighting, if that isn't a spoiler right there).

The acting - all by Siamese stars likely unknown to western viewers - is excellent, as the actors put different complexions on the same incident. Apparently one supporting thespian, Phettai Wongkamlao, is best known on home soil as a comedy superstar, and putting him in this serious drama (as a peasant woodcutter who stumbles across the bloody crime scene) is a bit of stuntcasting against type that works nicely. Maybe as much as Ashton Kutcher Dude-Where's-My-Car would have done it for me as Steve Jobs. Do yourself - and Lord Buddha - a favor and get a look at AT THE GATE OF THE GHOST. (3 1/4 out of 4 stars)