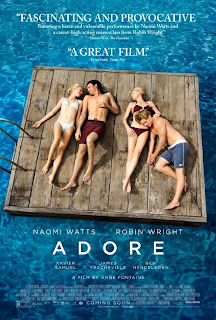 A controversial premise and beautiful scenic cinematography are the chief assets of ADORE, a drama based on a Doris Lessing story titled “Grandmothers.” The story is about two women, best friends since childhood, who become the lovers of each others' young-adult sons. The affairs, and the cozy, quasi-incestuous quartet, continue for years — twenty in the Lessing story, considerably less in the film, before the women decide they'd best stop and let the young men find more age-appropriate mates.

In the hands of French director Anne Fontaine, the scandalous tale becomes a tedious exercise in artiness, in which photography is meant to fill in the lacunae of Christopher Hampton's screenplay. The seaside idyll is gloriously photographed, the camera savoring the muscular young men surfing, swimming and sunning themselves alongside the fit, bikini-clad mothers. The writing, however, is spare and vapid. In place of the interior monologues of Lessing's story, we have lengthy shots of the characters engaged in silent contemplation. Thinking, thinking. Also, imbibing endless goblets of wine. Drinking, drinking. In other words, it's a very French-style film, though in English and set in beachside New South Wales, Australia (relocated from Lessing's native South Africa.)

Robin Wright, wielding a wobbly Australian accent, is Roz, who is indifferently married to Harold, an academic who complains that she's closer to her widowed best friend Lil (Naomi Watts) than to him. She affirms Harold's assessment by letting her husband take a teaching job in Sydney while she stays behind to commune with Lil, who lives next door, and frolic sexually with Lil's hunky 19-year-old son Ian (Xavier Samuel). When Roz's equally handsome son Tom (James Frecheville) finds out what's going on, he decides to start sleeping with Lil. The affairs become more than physical, as both of these wildly inappropriate couples fall in love. None of them has any interest in other relationships, because no one can penetrate the quartet's intimate circle. At the art gallery where Roz and Lil work, Lil rejects the bumbling advances of bald-headed suitor named Saul (Gary Sweet), who eventually concludes that the two inseparable women are lesbians (or “lezzos,” as Roz and Lil put it).

As the years go on, life draws the young men outside the circle, and the women decide to end the affairs so they can someday be respectable grandmothers. This is not so easily done; the quasi-Oedipal coziness of the unorthodox couplings have left the young men unprepared for normal, socially acceptable relationships, and the women find the separation from their lover/sons agonizing.

What makes the film seem new is its relatively non-judgmental, non-snickering treatment of unorthodox sexuality. (If it were an American comedy, there'd be lots of talk about MILFs and cougars.) The arrangement is portrayed in a matter-of-fact way, almost as a female empowerment strategy (as well as a pretty sweet deal for the boys). The adoring foursome, with its easy, womb-like comfort, is the only relationship structure these characters can tolerate. This may be Lessing's perverse joke — that the relationships society frowns upon may be the ones that actually work. But the adaptation of Lessing's story is problematic, not only because of its plodding linear structure — unlike the original, which begins in later years and is told in flashback — but because of its dearth of insight into the characters' thoughts and motivations. So the audience is left to project its own ideas onto the actors' attractive faces as they sit, in profile, contemplating the surf. 2 out of 4 stars.

Posted by Pamela Zoslov at 2:01 PM