A Pig Across Paris (September 24th at the Capitol Theatre)

[A PIG ACROSS PARIS screens Tuesday September 24th at 7:00 pm at the Capitol Theatre in association with the Cleveland Cinematheque.] 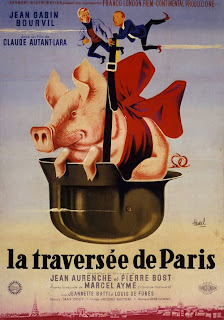 “Don't laugh too loudly when you see it, or else your neighbor won't hear the dialogue,” warned director François Truffaut about La Traversée de Paris, or A PIG ACROSS PARIS, the 1956 dark comedy directed by Claude Autant-Lara and set in Paris during the German Occupation. The film, only briefly released in the U.S. in the 1950s, disappeared completely for years. Cleveland audiences have the opportunity to see a new restoration of this rare classic, presented by the Cleveland Cinematheque at the Capitol Theatre, Tuesday, September 24 at 7 p.m.

Adapted from a novel by Marcel Aymé, the film, also known as “Four Bags Full,” offers a fascinating view of life in Paris under Gestapo rule — hunger, suspicion, black market smuggling, tension and fear, handled by the city's war-weary denizens with a particularly Gallic cynicism. Here is a world where, in one of the world's most beautiful cities, a person can't expect the luxury of eating every day, and might be arrested for simply having a bar of soap.

The film's visual style, with cinematography by Jacques Natteau, is breathtaking. It was shot originally in color and processed in black-and-white, creating a rich, gleaming chiaroscuro of wartime Paris' cobblestone streets, lampposts, back alleys, rooming houses, barrooms and butcher shops of wartime Paris. Autant-Lara's complex compositions, reminiscent of still photography by Brassaï and Robert Doisneau, create a contrapuntal geometry of action, as in the gloriously kinetic scene in which the pig is slaughtered while a man plays a happy tune on the accordion to mask the noise.

The story finds the nervous cab driver-turned-black marketeer Marcel (played by the French comic Bouvril) recruiting Grandgil (Jean Gabin), a blustery stranger he meets in a bar, to help him on a dangerous job, transporting 100 kilos of pork in four heavy suitcases across the city. One of Marcel's reasons for enlisting Grandgil is that he suspects Grandgil is interested in Mariette (Jeanette Batti), Marcel's wife, who is becoming disenchanted with her husband's lack of enterprise.

Grandgil turns out to be a difficult partner, indiscreet and at times belligerent, loudly demanding more money from the Montmarte butcher (Louis de Funès) for whom they're smuggling the meat. But he is outgoing and resourceful where Marcel is timorous and bumbling, and is able to talk the pair out of danger from the patrolling Gestapo officers, at one point by reciting a German-language poem as subterfuge. His ease with German, overheard at one point by Mariette, raises suspicion: can he really be trusted?

The movie glides between broad farce, as the men contend with obstacles including hungry dogs, and ominous tension. The specter of danger is ever-present, culminating in a harrowing scene in which the smugglers are questioned by the Nazis, headquartered in one of the city's finest hotels. There is a class difference between Grandgil and Marcel: Grandgil is a well known painter, merely playing with the idea of being a black market smuggler, and Marcel has no other means of survival. That class divide determines their contrasting fates.

Its humor and acting styles (in particular Gabin's over-the-top bellowing) don't always translate well from the French idiom, but the film is nonetheless a stylistic delight, a pre-New Wave artifact that paints a stark, authentic view of life under occupation.  3 1/2 out of 4 stars.