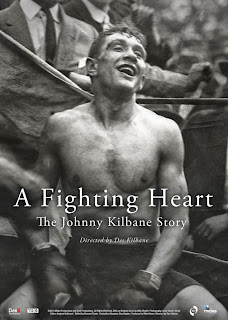 The definitive, magisterial Encyclopedia of Cleveland History tells us that local athlete-turned-politician John Patrick Kilbane (1889-1957), though a featherweight boxing champ of some renown, “was not a very popular titleholder” out of town. Owww! I’d hate to read what the new edition has to say about LeBron. About me, for that matter. Thanks, big, thick Encyclopedia of Cleveland History. I’m sure readers outside of town often mistake you for a joke book too.

A more passionate and worshipful POV of Johnny Kilbane comes from A FIGHTING HEART, a pleasant, nostalgic Irish-made short feature by filmmaker Des Kilbane (naturally) that traces the immigrant success story of this illustrious Clevelander, from his ancestral roots in Achill Island, where there is a Kilbane Town (naturally). Better be prepared for some serious Irishness here.


Born west of the Cuyahoga River within the sound of St. Malachi bells to an immigrant steelworker-father, Johnny took up featherweight-class boxing under the coaching of pugilist Jimmy Dunn. Kilbane is described here as a “scientific” boxer, that is, one who used his wits as much as his fists. Experts and boxing historians from the storied fight magazine The Ring (no relation to the schlocky Japanese horror-franchise) are interviewed, and I was charmed to see a name that struck me from the 1980s, latter-day Irish boxing champ Barry McGuigan, speaking about Kilbane and the long shadow he cast down history.

Though Kilbane went on to became a legislator, a clerk of the municipal courts, and even a poet, the film naturally focuses on his 11 years as featherweight champ, from 1912-1923. In an echo of one of the little-remembered Oscar-nominated features of history, 1967’s THE LEGENDARY CHAMPIONS, we hear that young Johnny, like many title-holders of the era, was shanghaied into show business, doing guest appearances in stage melodramas and Vaudeville. This was quite typical of boxing at the time – remember that when Mike Tyson makes another movie gag cameo, and ponder that there is nothing much new under the sun.

And speaking of showbiz, turns out that none other than Frank Stallone, actor-vocalist brother of Sylvester, contributed to the sweet science of Kilbaneology by helping rediscover a long-lost silent fight film of Johnny Kilbane in a title bout against a longtime nemesis. The footage undergoes blow-by-blow analysis here. Yo Frank! Way to go! I’m sorry I can’t call many of your movies to mind very favorably (one was amusing but I forget the title - something about an island?), but you really enhanced A FIGHTING HEART. Now watch, Frank Stallone will proceed to unearth the long-lost video footage of LeBron James scoring his first-ever slam dunk and Cleveland will hate him and his movies again, even that one about the island. (3 out of 4 stars)