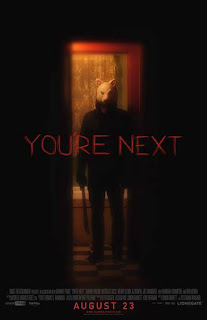 There are probably more new horror films being made and released these days than at any time in the history of the genre, so you might think that a life-long fan like myself would be thrilled. You would be wrong. Whether we're talking big screen Hollywood films or straight to video, the vast majority of recent horror films are both appallingly unoriginal and depressingly bad. That's why it's such a pleasant surprise when a movie like YOU'RE NEXT comes along.

To be fair, I'm not entirely sure if horror is an accurate description of YOU'RE NEXT, but it is the kind of violent, darkly humorous film that tends to play better to horror fans than a general audience. The set-up is that the dysfunctional offspring of Paul (Rob Moran) and Aubrey (Barbara Crampton) have gathered, significant others in tow, at their parents' secluded mansion for an anniversary party. Old sibling rivalries and parental disapprovals flare up, only to be put on the backburner once unseen assailants begin attacking the house with a crossbow. Fortunately Paul's disappointment of a son Crispian (A.J. Bowen) has brought along his girlfriend Erin (Sharni Vinson), as she proves surprisingly adept at fending off the attackers.

So who exactly is attacking the family and why? The seemingly random attack on a neighbor in the pre-credits sequence and various other clues seem to indicate the assailants, all sporting white animal masks, are simply thrill killers. But there's also the fact that Paul made his money in the arms business, which it's implied might have made him a target. As the film progresses, other red herrings and false leads pop up to keep the audience guessing. If the final reveal isn't a complete surprise, it's at least far more clever and satisfying than just about any recent “whodunnit” I can think of.


The various plot elements in YOU'RE NEXT aren't all that original, with obvious nods to home invasion survival horror flicks like LAST HOUSE ON THE LEFT, FIGHT FOR YOUR LIFE, ILLES, and THE STRANGERS to name just a few. And while I've no idea if it was an influence or not, the general tone of darkly misanthropic humor reminded me of Mario Bava's 1971 classic BAY OF BLOOD (aka TWITCH OF THE DEATH NERVE, aka CARNAGE, aka LAST HOUSE ON THE LEFT 2, etc, etc,).


What gives the film its freshness is the way writer Simon Barrett and director Adam Wingard approach the material, focusing far more on character and dialogue than your average horror film, without ever doing so at the expense of thrills and shocks. And then there's Vinson, who with this film immediately joins the ranks of the great horror heroes and heroines. With the amount of abuse she endures and the way she improvises to protect herself, she's kind of like a smarter, more competent female version of Bruce Campbell's Ash character from the EVIL DEAD films.


Are there aspects of YOU'RE NEXT that don't entirely work? Sure. For one thing, the masks being worn by the killers are ludicrous with their tiny little eye slits reducing visibility to almost nil. But I guess when have killers in horror movies ever been practical? Also a little more time could have been spent setting up the characters and the family dynamic before the carnage starts. Not necessarily much, but even another five or ten minutes would have helped. And then there's the nagging issue of a guy who made his living in the weapons business not having a single gun in his house. It's possible, but it just didn't feel right. Those are relatively minor issues, though. Once the movie kicks into high gear, it just kind of sweeps you along with its enthusiasm and energy.


Just as an aside, there's a line in the film about one character, a typically pretentious and feckless indie filmmaker played by the genuinely talented indie horror director Ti West, having one of his works shown at the “Cleveland Underground Film Festival”. No such festival exists, as far as I know. Maybe they can fix the home video version to reference the Ohio Independent Film Festival or the Indie Gathering instead. 3 out of 4 stars.
Posted by Bob Ignizio at 12:01 AM