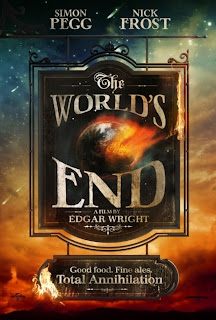 THE WORLD’S END, the final entry in director Edgar Wright’s Three Flavours Cornetto Triology (named for the uniquely British tri-colored ice cream treat fawned over in the series’ first entry, SHAUN OF THE DEAD), is a daft, artful, beer-soaked caper of a film, boasting a bigger heart, fewer self-conscious genre homages, and just as many laughs as the trilogy’s prior entries (the aforementioned SHAUN, and HOT FUZZ).

The film tells the story of Gary King (Simon Pegg, who shares writing credit with Wright), an unrepentant party animal who, 40 years into the downward spiral that’s become his life, decides to reconvene a group of four childhood friends in hopes of conquering the Golden Mile – an infamous 12-tavern pub crawl that their childhood selves left drunkenly unvanquished.

Though narratively disparate, each film in the Cornetto Trilogy features characters who yearn to mature and find a productive life without sacrificing their individuality or principles to a prevailing homogenizing ideology. In SHAUN OF THE DEAD, this threat was flesh-peckish zombies, in HOT FUZZ, it was the WICKER MAN-reminiscent mantra of “the greater good,” and in THE WORLD’S END… well, I won’t spoil the fun. Let’s just say it takes the capitalist philosophy of franchising to a whole new extreme.

What I will spoil is the larger significance of the story which is all about finding a way to live actively and contentedly in an overwhelming present without settling for culturally imposed happiness or stagnating in the dishonest nostalgia of a self-selected past.

After the eyeball-bursting video game mania of Wright’s singular and uncompromising SCOTT PILGRIM VS. THE WORLD, THE WORLD’S END feels almost subdued. Don’t get me wrong – by normal film-making standards, the sheer quantity of manic pub brawls and sci-fi action is absolutely off the freakin’ chain. But whereas HOT FUZZ laid out a dizzingly packed narrative and SCOTT PILGRIM was a veritable visual gattling gun, END keeps its story almost disarmingly simple and limits its cinematic insanity to where the (still expertly crafted and choreographed) action is only almost gratuitous.

Certainly, the subtle reduction of visual and narrative complexity gives Wright’s characters longer to breathe, talk and reflect, making WORLD’S END his most emotionally satisfying film, but it also had me thinking - the  protagonist is a character who resides permanently and desperately in an arrested state, finding diminishing solace in the mix tapes, video games, and ritual distractions of his youth.

For as much as Wright’s films tend to be about characters navigating a forward emotional course, they’re also famous for the myriad cinematic references, homages and parodies Wright packs into each – winking hints at the director’s own tendency toward comforting cultural nostalgia. Interesting, then, that THE WORLD’S END finds Wright making fewer concerted diversions into his own film-watching past than ever before.


Certainly the thematic trio's final film is a more-than-fitting conclusion to the Three Flavours Cornetto Trilogy. As for Wright’s continued career as a filmmaker, THE WORLD'S END hints at exciting new possibilities. (3 1/2 out of 4 Stars)
Posted by Matt Finley at 1:29 AM