[Press release from the People's Temple in Ohio City.] 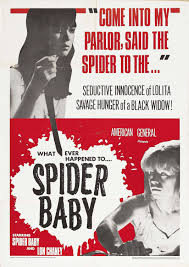 The People's Temple in Ohio City has been putting on a series of Wednesday double features that cater to the more psychotronically inclined movie fans. This week they've got a “Haunted House” double feature with the 1977 Japanese film HAUSU (aka HOUSE) and the 1964 Jack Hill classic SPIDER BABY, which stars Lon Chaney in one of his last great roles, and Sid Haig in one of his first. Next week it's “Monkey Mayhem Movies” with CARNIVAL MAGIC from 1981, and the underrated George Romero thriller MONKEY SHINES from 1988. Shows start at 8:00 pm. For more info, check out the People's Temple facebookpage.
Posted by Bob Ignizio at 12:00 AM