[THE HUNT opens in Cleveland on Friday August 2nd exclusively at the Cedar Lee Theatre.] 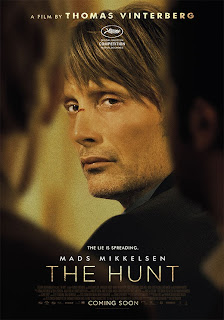 There is no doubt that the sexual abuse of children takes place, and that when it does, it is a horrible thing. There is also no doubt that innocent people have been wrongly accused and convicted of committing such acts, and that even when they are exonerated, public perception often continues to see them as guilty. Thomas Vinterberg's THE HUNT deals with an example of the latter.


The story concerns a well liked kindergarten teacher named Lucas (Mads Mikkelsen). Lucas is especially well liked by Klara (Annika Wedderkopp ), the daughter of his best friend Theo (Thomas Bo Larsen). One day when Klara is mad at Lucas, she vents about him to the principal of the kindergarten, insulting him using language that she picked up from her older brother and his friends that could reasonably be interpreted in such as way as to make an adult think that Lucas had inappropriate contact with the girl. This is further compounded when someone with no real skill or authority to interrogate children asks Klara leading questions and plants further details in her head. Soon, the whole town is convinced that Lucas is guilty, and before any trial has taken place, they treat him accordingly.

Although this is a Danish film, the inspiration seems to be the McMartin preschool case which took place in California in the eighties. If you are about my age or older, you almost certainly heard about the alleged mass molestations of children at a preschool by several of its employees. My guess is that not all of those who know about the case know that all of the accused were acquitted, and that serious questions about the way the children were questioned by police and other authorities were raised.


THE HUNT largely eschews the more sensationalistic aspects that often colored American abuse cases such as this. That means no references to Satanic cults and underground tunnels, but the way that details can often be invented and (intentionally or not) spread through the potential witness pool so that a seemingly consistent narrative is created is shown quite effectively, nonetheless. So, too, is the way that people can be quick to judge someone based only on an accusation as long as the accusation is despicable enough. All of this is accomplished in the same low key, matter of fact manner as co-screenwriter Tobias Lindholm (in collaboration with Vinterberg) used in his own recent film A HIJACKING, albeit with just enough added tension to make this a slightly more gripping piece of cinema. 3 1/2 out of 4 stars.