The Apartment (August 9th at the Palace Theatre on Playhouse Square)

[THE APARTMENT screens Friday August 9th at 7:30 pm at the Palace Theater on Playhouse Square.] 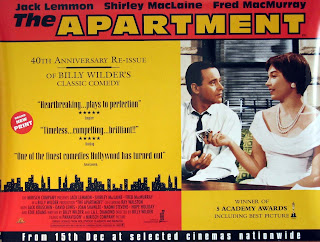 I'm so dull. If I were to ever get hired in a nice office job, I'd probably get fired for downloading articles from the Playboy.com website. Yes, downloading the articles. Not dirty pictures, just the articles.

I'd be too tempted by, say, the hot, steamy, previously-unpublished Norman Mailer essay about Fidel Casto and cache it from Playboy at a work computer on company time. "Loser!" the kiddie-porn chickenhawks and Asian-girl S&M fanciers sitting smugly at their own cubicle-terminals will call me, as I'm marched out by security thugs.

Wait, no! Hire me anyway; I get my Playboy fix without being connected to the Web, from a software CD I bought from Dave's Used Computers back in the day (shoutout to Dave's Used Computers, I think the first place I ever saw a laptop). This CD is a compilation of all the Playboy interviews since the beginning (Miles Davis), and there are some real gems. A major revelation was the Q&A with Jack Lemmon, in which - even circa 1964 - the interviewer is amazed that this Oscar-winning actor and top box-office draw is no method-acting weirdo (or, today, some heroin-addicted sociopath serially impregnating underaged swimsuit models), but a genuinely humble, nice guy. Lemmon, in fact, was a bit apologetic about his performance in the outstanding Billy Wilder comedy THE APARTMENT, telling the Hugh Hefner mag that the role verged so close to his own personality he felt he really hadn't given the audience as diverting a show as they deserved.

Lemmon plays meek C.C. Baxter, a lowly statistician in a giant Manhattan office building housing an insurance company whose workforce is bigger than some whole towns (while one might assume a location shoot, Wilder had the vast, sterile environment designed to his specs on a soundstage). C.C. happens to be a bachelor living in an apartment with no roommates. His bosses thus cheat on their wives in his suite with their floozy secretaries or bar girls; meanwhile C.C. has to spend most nights out - even if he's just standing in the street in the rain, or sleeping in Central Park. Ironically, thanks to all the female activity, C.C.'s neighbors believe he's a tireless Casanova, rather than the lonely milquetoast he really is.

C.C. strikes up a genuinely warm friendship with the skyscraper's elevator girl, Fran (Shirley Maclaine), who seems to be classy, smart and a real catch compared to all the other mistresses. But Fran is actually the latest secret lover of company president Sheldrake (Fred MacMurray). The married CEO bribes Baxter with promises of promotions and prosperity - if Baxter will similarly lend Sheldrake the apartment as a love-nest getaway with Fran.

THE APARTMENT is perfectly cast from the top down, with Lemmon sublimely conflicted as Baxter, a most untypically passive and non-assertive movie "hero." I didn't get a confirmation from the Playboy interview, but word is that director Billy Wilder kept the script's ending secret from the actor up to the last minute; not even Lemmon knew until filming his key scenes whether his character would show some backbone and finally defy Sheldrake's corrupt workplace.

Still, while some critics rhapsodize that THE APARTMENT only improves with age, I couldn't help but find bits of it as outdated as the stated $85 per month (sigh) rent C.C. pays for his NYC digs. Even with the big-city sophistication, THE APARTMENT feels like an artifact from Mad Men America - when sex was kept more private, feminism virtually unknown, divorce avoided at all costs, and loyalty to one's company (where you were expected to stay a lifetime - you know, like the Plain Dealer) a golden rule. All outmoded today - and I wonder (and often get into trouble wondering) how many of our "third wave" feminists around in this no-income-no-jobs era don't mind at all using their sexuality on the Sheldrakes of 2013 in order to hold onto their secretarial or, um, elevator-girl gigs.

But that's another movie altogether. The moral quandary THE APARTMENT sets up is a dandy one, and you really don't notice that the movie runs two hours plus, normally excessive for a comedy. The instrumental theme music also became a classic on the nostalgic charts.

For what it's worth, the youth comedy LOSER, from 2000, starring Jason Biggs and Mena Suvari, was seen by some as a loose remake of THE APARTMENT, but accept no substitutes for Lemmon, MacLaine and Macmurray. And Billy Wilder, for whom Jack Lemmon told Playboy he'd act out the phone book if Wilder directed. (3 1/2 out of 4 stars)