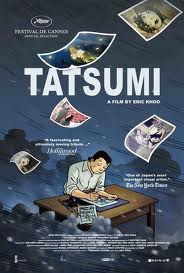 For a sister site of this blog I was doing Blu-Ray reviews of Japanese "anime," but they haven't been running my material lately. I think it's because the webmaster moved to Austin to take a job-of-the-kind-they-don't-have-in-Cleveland (in other words...a job). And being an Austinite, he's now too cool to deal with the likes of me now.

(Hey, I understand, no problem. If our positions were reversed I'd do the same. Yes, call me `Tex' Cassady; I helped co-found the SXSW Festival. I've lived in this beautiful state capital for ages; remember my funny cameo in SLACKER? No, never heard of Cleveland. Isn't it that awful town in Iowa that some ballplayer named Jim LeBron left behind?)

So because I'm flatlining in my anime-reviewing non-career, I won't get to recommend to the "otaku" fandom the Asian animated import TATSUMI. Which will be okay by those Shinjuku-schoolgirl-fetishing weirdos doing cosplay; this movie has as much to do with that universe as Superman or Spider-Man does with AMERICAN SPLENDOR. AMERICAN SPLENDOR is a fine comparison, fact. This 2011 feature does for Yoshihiro Tatsumi what the acclaimed American film did for the late Harvey Pekar - although animation dominates here far more than does brief live action.

Tatsumi is a significant writer-illustrator of Japanese "manga," or  comics who started out as a kid, like so many Nippon young boys did, drawing in imitation of "Astro Boy" creator and "god of manga" Osamu Tezuka. But, beginning in the late 1950s, Tatsumi turned from fantasy and childish material and created a raw, realistic graphic-novel genre he called "gekiga," that might be compared (at least for its taboo-breaking impact) to underground "comix" in the West.

Tatsumi's personal history is rendered here in stark, mostly monochrome animation - not remotely the style of commercial anime - as a struggling artist (though proclaimed a manga prodigy and approved by the Tezuka, his family still suffered financially). His autobiography - drawn, to coin a term, from his 2009 graphic memoir A Drifting Life - is here interlaced with short cartoon narratives based on five of his gekiga he said he created in the 1970s, as a caustic reaction to a Japanese economic boom that never seemed to trickle down to the lower classes he knew so well.

The stories-within-the-story depict desperate and doubting postwar Japanese embroiled in dire dilemmas. There's a photographer revered for his atom-bomb-casualty snapshot who discovers his image was not what the world thinks it is. There's an artist obsessed with  pornographic graffiti. There's a jaded prostitute being romanced by an American serviceman, while her drunken war-vet father mooches off her. If it were rated by the MPAA, I tell you, this film might receive an NC-17, as much for the gut-punch themes as sex, brutality and nudity. Tatsumi claims that the great Tezuka fell down a flight of stairs and gave the excuse that he got distracted by being worked up in a state after reading the gekiga.

Yoshihiro Tatsumi, cynical though he is, seems to have made it through Japan's cycle of economic boom-bust-radiation poisoning with a decent marriage, nice family and strong peer-recognition in the graphic-lit scene, much like Harvey Pekar (or Robert Crumb, another genre relation). I don't doubt he wishes he could have a bit of that Pokemon or Yu-gi-OH! money to get him through the tough times, however. But if doesn't have TokyoPop Publishing putting his stuff out there on a mass basis, along with action figures, he's got TATSUMI now, to represent his singular vision to the western world. This should'a-been Austinite says check it out. (3 1/2 out of 4 stars)
Posted by Charles Cassady Jr. at 12:57 AM