Skelly Film at the Indie Gathering in Hudson Ohio 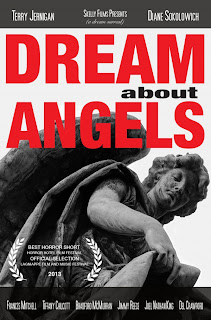 Skelly Films is happy and proud to announce their participation in the 2013 edition of the Indie Gathering International Film Festival in Hudson, OH. The festival takes place on August 16, 17 & 18.
Skelly Films is honored to have TWO films that won Best Of in their categories: UNAVAILABLE for Best Romantic Comedy and Dream About Angles for Best Horror Short. In addition, UNAVAILABLE has been nominated for four more awards: Best Actress-Diane Sokolowich, Best Supporting Actress-Rachael Lang, Best Cinematography-Nick Raimondi and Best Direction-Ernie Smith.

UNAVAILABLE is the story of two damaged souls who give love one more chance. It has been referred to as "whimsical, much like Amelie" and features a soundtrack with songs by indie stars Melissa Ferrick and Craig Aspen (of The Believers) as well as songs by Rylo, The Jukehounds, 11after, Kevin Danzig and Nick & Hannah Bruner.

Dream About Angels is the story of a priest who has begun to find more joy in his dream world than in his real life. He finds though that his dreams are not at all what they seem to be.

Trailers for both can be found at www.skellyfilms.com