Repost: Disconnect (August 16th and 17th at the Cleveland Cinematheque) 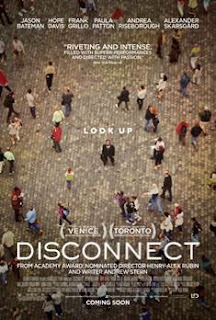 What did the Internet ever do to the filmmakers behind DISCONNECT, a cautionary tale about modern computer technology? The independently made film is thematically reminiscent of antique propaganda flicks like REEFER MADNESS, except that the perils it warns against are smartphones, PCs and iPads rather than marijuana. In the mode of Paul Haggis' CRASH, DISCONNECT is composed of intertwined stories about the emotional alienation produced by our techno-crazy society. Evidently the benefits of computers – information, knowledge, entertainment, the review you are reading – mean nothing in the face of the Web's many scary dangers.

One story centers on the Boyd family, headed by busy lawyer Rich (Jason Bateman) and wife Lydia (Hope Davis). Rich can't tear himself away from his cell phone long enough to notice that his 15-year-old son Ben (Jonah Bobo) is friendless and desperately lonely. Two of Ben's classmates, who are given to such malicious pranks as pissing in a sports-drink bottle and replacing it in a store cooler, target geeky Ben for cyber-bullying. The boys, Jason and Frye (Colin Ford and Avian Bernstein) create a fictional girl's Facebook profile and engage Ben in a flirtation that escalates dangerously. In a development ripped from the headlines, an embarrassing photo goes viral, with predictably tragic results. Writer Andrew Stern and director Henry Alex Rubin get the high school milieu and the kids' motivations just right. The adolescent pranksters, not “bad” kids individually, are egged on by each other's casual cruelty. When Jason displays the occasional hint of conscience, Frye accuses him of being “in love” with victim Ben. Interestingly, Jason later explores his troubled relationship with his ex-cop dad Mike (Frank Grillo) by connecting online with Ben's aggrieved dad, Rich.

The other stories are less persuasive. A local TV news reporter, Nina (Andrea Riseborough) logs on to a live sex chat site and initiates a conversation with Kyle (Max Thierot), a young man who masturbates online for paying clients. A game but aimless young man with Brad Pitt looks, Kyle lives in a messy house with other teen sex-chat workers, presided over by the vaguely sinister Harvey (fashion designer Marc Jacobs, in his film acting debut). Ambitious Nina persuades Kyle to tell his story on camera, with his identity (barely!) concealed. The story propels Nina to national fame but also brings the unfriendly scrutiny of the FBI. The film explores Nina's ambiguous and vaguely sexual interest in the unstable Kyle and alludes to the class divide between them. Is Nina, who betrays Kyle, actually more exploitative than cyber-pimp Harvey? (With Harvey, Kyle and his cohorts at least get expensive running shoes and other gifts from grateful clients.) The question is not fully addressed before the story collapses into a bout of violence no more believable than the idea of a teen cyber-porn rooming house.

A third story focuses on Cindy and Derek (Paula Patton and Alexander Skarsgard), a couple who have recently buried their baby son. Derek, an ex-Marine, has dealt with his grief by burying himself in work, leaving Cindy to seek solace in an online support group. Derek, meanwhile, has his own computer dependency, spending money on online poker in his lonely hotel room while traveling for business. Cindy and Derek's credit card information is stolen, and they consult Internet security expert Mike Dixon (the cyber-bully's dad). In the real world, identity theft is prosecuted by authorities – in Hollywood movies, for some reason, the only recourse is for victims to physically pursue and apprehend the fraudsters (see Identity Thief). The police, oddly, are said to be “too busy.” Derek and Cindy hit the highway to track down the suspected identity thief. Derek, an Afghanistan war veteran, reverts to combat mode, handgun in tow. His inadvisable plan has a stimulating effect on the couple's troubled marriage. Pumped with adrenaline, Derek feels more alive, and Cindy is turned on by her husband's reversion to warrior mode. Never mind that in real life, Derek's vigilante actions would earn him serious prison time.

Having built these detailed stories, the film finds itself with nowhere to go except to have characters beat each other up. That's too bad, because unlike many “message” films, it's highly watchable and technically accomplished. The actors are excellent, even if the script at times fails to give them believable things to say and do. Ken Seng's cinematography is appropriately edgy, and the depiction of online chats is cleverly done, juxtaposing the text with the characters' reacting faces. These qualities converge nicely in the school-bullying tale, a wrenching and emotionally accurate story that deserves its own feature film. 2 and 3/4 out of 4 stars.