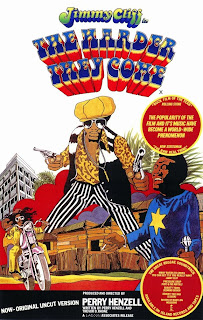 Syndctd Entertainment & International Films Management (IFM) have officially announced they will theatrically re-release Perry Henzell’s cult classic film “The Harder They Come,” to celebrate the 40th Anniversary of its US premiere.  On opening night in Kingston, Jamaica, the reggae-fueled hit provoked riots when thousands could not get into the sold-out Carib Theater.  The February 1973 launch in New York led to six straight years of cannabis-smoke filled midnight  screenings around the United States and has gone on to become one of the best regarded independent films of all time.

The film will screen on Thursday, September 5th at 7:30 PM at the Apollo Theatre (19 E. College St., Oberlin, OH) and the Cedar Lee Theatre (2163 Lee Rd., Cleveland Hts., OH).  Tickets are $10 and are on sale at the theatre box offices and online at clevelandcinemas.com.

“The Harder They Come” stars GRAMMY winning legend Jimmy Cliff as Ivan Martin, an aspiring reggae singer-songwriter, who turns to life as an outlaw after being swindled by the corrupt record industry.  Directed and produced by the late Perry Henzell, and co-written with Trevor Rhone, the film ranked among AMC's all-time Cult Classics.  “I had a choice when I set out,” Henzell once said, “to make a film for Jamaicans or…for the rest of the world.  I chose to make a film for Jamaica.”
In the end, the film’s impact was felt far beyond the Caribbean, introducing both Jamaica and reggae to the world while launching Jimmy’s music career to international success.  "I knew 40 years ago we had something special with the film. With the re-release of “The Harder They Come,” combined with my upcoming tour and recent Grammy win, I couldn't think of a better way to celebrate the past, present and future." says Jimmy.
To commemorate the 40th Anniversary, the film will be released theatrically in its fully restored and re-mastered version for pristine theatrical presentation, by IFM's long time distribution partner Xenon Pictures, who will be releasing a Blu-ray version for release later in 2013.  As a part of Syndctd’s 360-degree approach to re-launching the classic film to a new audience, a brand new merchandise line has been created with a fresh take on vintage artwork from the film.  Fans around the world will be able to purchase the clothing at select theatres (including the Apollo and Cedar Lee Theatres), national retail outlets and online through the film’s newly revamped website (http://thehardertheycome.com).
Syndctd also ran a very successful crowd-sourced poster re-design contest on Facebook, asking fans and artists to submit their own take on the original poster artwork.  The commemorative winning poster design will be displayed in theatres nationwide. "We are honored to be working with Justine Henzell at IFM and Jimmy Cliff to re-release such a classic and historic film back onto the big screen.  Xenon’s newly restored version and the film’s unforgettable soundtrack will be an amazing experience for fans of all generations to enjoy in movie theatres around the world," say Syndctd Entertainment co-founders Philip Camino and Jon athan Chaupin.
In conjunction with the re-release of “The Harder They Come,” Jimmy will embark on a 17 date tour, performing in intimate theatre and club settings in the US on his “2013 Many Rivers Crossed Tour,” beginning September 6.   For tickets, info and other tour dates, visit www.jimmycliff.com
ABOUT SYNDCTD ENTERTAINMENT:
Syndctd Entertainment (http://syndctd-entertainment.com) is a full-service film marketing and distribution company, offering filmmakers and studios a multi-platform release strategy with their vast network of exhibitor, VOD/digital, and home entertainment partners.  Syndctd has worked with numerous globally recognized artists and filmmakers to release their films around the world, and help them navigate the new media landscape with direct-to-fan marketing and targeted social media engagement.
ABOUT INTERNATIONAL FILMS MANAGEMENT:
International Films Management retains all rights in “The Harder They Come” and various other intellectual property created by Perry Henzell.  IFM is an active production partner in the live musical adaptations of the film and other The Harder They Come-related projects in the works.  The company is owned by Jason and Justine Henzell.