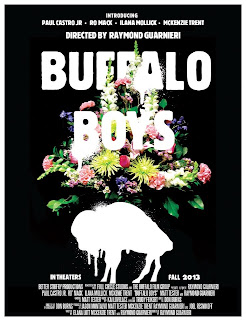 
Buffalo Boys is an unforgiving tale of morality and consequence, and shares a truthful look at a hidden world of suburban youth. Inspired by a true story, BUFFALO BOYS follows the life of IAN, a 15 year-old living in Buffalo, NY. After discovering the man who raised him is not his biological father, Ian's world is turned upside down as he heads down a path of self-destruction and murder.


The film, which has already won “Best Coming Of Age Feature” at the Manhattan Film Festival in June, has been named "Best Crime Drama", with nominations for two additional awards, "Best Supporting Actress" (Mckenzie Trent), and "Best Overall Feature". The festival, which features over 125 independent and experimental films in a wide range of genres, runs from August 16th - 18th in
Hudson, OH.