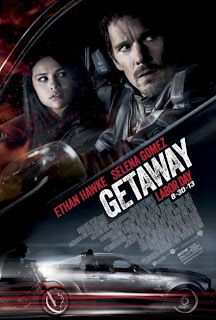 Retired racecar driver Brent Magna (Ethan Hawke) speeds around an Eastern European city in an armored Shelby Mustang Super Snake wreaking havoc while getting chased by police cars. Unwillingly along for the ride is an unnamed young girl (Selina Gomez) who just happens to be a computer whiz. Both driver and passenger are at the mercy of an unseen bad guy who has kidnapped Magna's wife, all part of a completely ludicrous heist plot.


There really isn't much in the way of story or acting or any other boring stuff like that in GETAWAY. Just lots of car chases and car crashes occasionally broken up by brief bits of expository dialogue and witty repartee on the level of, “I hate you.” It's not much of a movie, but I do at least have to commend the filmmakers for steering clear of the CGI and doing all the stunts for real. Unfortunately the editing is so fast you seldom get to really savor the smash-ups, so even on that basic primal level the film fails.

The final nail in the coffin is the awful chemistry between Hawke and Gomez. They're basically doing their take on the mismatched partner thing, and the constant insults hurled by Gomez at Hawke are blandly written and incompetently delivered. So of course the film drags out the antagonism between the two characters long past the point where it becomes insufferable. And when the inevitable transformation of their relationship to one of grudging respect and friendship does finally occur, it feels forced, arbitrary, and utterly unconvincing.


One has to feel a little sorry for Hawke; a respectable actor with mid level star power, he can still topline a theatrical release, but it's almost always a clunker like this one. As for Ms. Gomez, she's in way over her head in what amounts to a co-leading role, with every line, expression, and gesture coming across as obvious and unnatural. There's another actor of some note who plays the main bad guy, but since his identity is meant to be a surprise I won't spoil it. Let's just say I don't feel sorry for him like I do Hawke as he's clearly just picking up a paycheck for doing minimal work.


Director Courtney Solomon generally keeps himself busy as a producer of B and lower grade horror and action films, only occasionally deigning to step into the director's chair himself (the forgettable AN AMERICAN HAUNTING and DUNGEONS & DRAGONS). Most of the films he produces go straight to home video which, glossy production values and big stunts aside, is where GETAWAY should have wound up, too. Even in that less demanding arena, though, one should still be able to expect more even out of a big dumb action movie than what we get here. 1 out of 4 stars.