Get more for less at the Indie Gathering, August 15-18 in Hudson 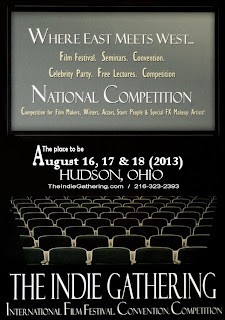 The latest estimates on the money lost by Disney's summer-epic-franchise-launch-that-nobody-really-wanted-to-see-that-wasn't-JOHN CARTER, alias THE LONE RANGER, is said to be in the neighborhood of $190 million. Wow, and that doesn't even count the cost of the on-set heroin addiction by the animal actors who played Silver the Wonder Horse (in other words...horses on horse). Nearly $200 mil down the drain. Why, for that kind of money, you could save several Cleveland homes from foreclosure. Delay it, anyhow. Don't worry, Disney will just get it out of petty cash from ABC. Or take a government corporate bailout, whichever is less effort.

Whatever happened to good old low-budget independent filmmaking? Movies that cost even less than $20 million? The answer is at the Indie Gathering, an annual Cleveland-area DIY movie expo and convention, happening from Thursday, August 15 (actually a sort of sneak preview featuring a Bollywood import) through Sunday, August 18, in Hudson.

Starting with a big networking party on Friday night, the Indie Gathering offers a weekend of `microcinema' film screenings, panel discussions, workshops and vendors, hosting both local filmmakers and out-of-town visitors, who have made homegrown and foreign cinema their hobby, obsession and occupation, shooting on the cheap on digital-video, videotape, or even real celluloid - but doing it economically, their way.

VIP guests include internationally known Cleveland filmmaker and cinematographer Robert Banks and Parma actress Annie Kitral, who has appeared in everything from WELCOME TO COLLINWOOD to The X Files on TV. There's Alan Tuskes, a makeup artist who has contribute f/x to KILL BILL, AUSTIN POWERS IN GOLDMEMBER, SPY KIDS and more. There's Joe Estevez, a B-movie perennial and member of the illustrious Sheen/Estevez acting family, as well as Robert Z'Dar, a memorably burly movie bad guy in TANGO AND CASH and others.

...And you, because the stated mission of the Indie Gathering is to get local folks involved. Spectators and fans get to meet northeast Ohio grassroots filmmakers not just to worship but as encouragement to join the regional-movie culture, as potential crew, possible actors or even writers, directors or producers. The Indie Gathering is masterminded by local filmmakers Johnny Wu (who is exhibiting his new music-video), Kristina Michelle and Ray Szuch - this latter a Cleveland martial-arts studio manager who also supplies film extras and expertise to needy projects.

Part of the Indie Gathering is a three-day marathon of independent short subjects and features from all over the world screening, some with the perpetrators in person. Entries this year include AXE GIANT: THE WRATH OF PAUL BUNYON, a 9:15 Saturday-night treat bringing a Texas-Chainsaw 'tude to the famous tall-tale character Also on Saturday night: ON THE NORTH COAST, a Cleveland crime thriller in the bloody-tongue-in-cheek Tarentino tradition. FLYING PAPER, on Sunday, is a documentary about Palestinian children in the war-ravaged Gaza Strip seeking to set a Guinness record for the most number of kites aloft at once (take that, KITE RUNNER!). There will also be a showcase of shorts generated as part of Cleveland's role in the 48 Hour Film Project.

Admission for the entire weekend a VIP rate of $35, or at the door Saturday admission for $25, Sunday for $20. The $15 ticket for Friday night also permits access to a filmmaker networking party, for those looking to get involved in the business. Attending individual film screenings is $7.

The Indie Gathering happens at the the Clarion Inn of Hudson, easily accessible off two freeway interstates. For more information, directions, a full film schedule, and a list of guests and production companies involved, go online to www.theindiegathering.com.