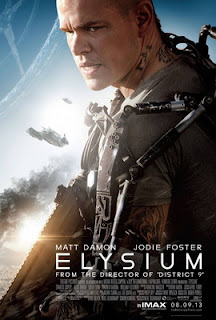 “Blessed are the poor,” opined evangelist Matthew.  “For theirs is the kingdom of heaven.”

The beatitude figures heavily in the sophomore science-fiction adventure from Neill Blomkamp, the upstart South African director who delighted many fans of the genre (and disgusted others) with his 2009 segregation allegory DISTRICT 9.

In ELYSIUM, urban blight has gone global by the early 22nd century, leaving Earth ill, underfed, overpopulated, and crime-infested.  The skyscrapers once occupied by well-to-do execs have been abandoned to street urchins and opportunists, but most of the planet’s millions of luckless souls live crammed in polluted slums and tent cities on the outskirts of the former metropolises.  Sentry robots maintain order with iron hands (literally) and have zero tolerance for resistance or sarcasm.  Astounding advances have been made in science and medicine, but the tech isn’t available to the impoverished 99%.

The ultra-rich have fled the planet for a donut-shaped space station in Earth’s outer atmosphere.  Constructed by the mega-corp Armadyne, the Stanford-torbus sanctuary Elysium rotates on an axis, creating an artificial gravity that lets its entitled inhabitants maintain their opulent lifestyles.  Mansions, mosques, and spas are built.  Arboretums are planted and swimming pools chlorinated.  Mechanical butlers fetch umbrella drinks for chaise-lounge bon vivants.  Elysium is disease-free; medical pods can cure leukemia or repair catastrophic organ damage within minutes by re-atomizing the body.

To say membership is exclusive is putting it mildly.  Illegal “immigrants” are deported—if not summarily executed—and unwelcome shuttles are blasted out of the ether.  Defense Secretary Delacourt (Jodie Foster) takes her job seriously and jumps at the chance to oust Elysium’s politically-motivated, laissez-faire President Patel (Faran Tahir).

Meanwhile, down in the ruins of 2154 Los Angeles, ex-con Max DeCosta (Matt Damon) is trying to keep the straight and narrow by working in an Armadyne factory, where he assembles the very robot cops that prolong his misery.  He dreamed of visiting Elysium as a boy, marveling at the artificial satellite that glows in the sky like the moon.  But when an industrial accident irradiates Max’s body, his fantasy is renewed in earnest.  He’s got just five days to get “up there” and get healed.

Desperate for a ticket off-world, Max reconnects with underworld friends Julio (Diego Luna) and Spider (Wanger Moura).  He’s promised a seat on an outbound shuttle if he takes one last dirty job:  Kidnap compassionless Armadyne CEO John Carlyle, the same company overlord who didn’t flinch at his manufacturing mishap—and who possesses the knowledge needed to unlock Elysium’s gates for everyone.

The abduction fails, but it’s one of the film’s snazziest action sequences.  Fitted with a exoskeleton to enhance his ailing body (like Doc Oc’s back-brace in SPIDER-MAN 2), Max tackles a couple robot bodyguards, but instead of taking his ex-boss hostage he only manages to upload Carlyle’s cerebral files into to his own brain.  Still, Spider realizes the encrypted data represents everyone’s ticket to the stars.

Delacourt knows, too, thanks to countless surveillance cameras at her disposal.  She reactivates psychopathic sleeper agent Kruger 32 (Sharlto Copley) on Earth and—in so many words—orders up Max’s head on a platter.

The fugitive reunites with an adult Frey (Alice Braga), now an overworked nurse with her own keen interest in Elysium’s healing pods.  Max is reluctant to endanger his childhood crush with Kruger’s camouflage cronies in hot pursuit, but his character arc calls for compromise and sacrifice—not to mention some nasty fisticuffs with his bionics-outfitted foe.

Damon is serviceable as the nothing-to-lose parolee-turned-messiah.  Foster’s snooty space bureaucrat speaks in a jarringly pompous accent that makes her come off like a no-nonsense version of Elizabeth Banks’ dystopian dame Effie Trinket in HUNGER GAMES, but she looks great at 50 and appears to relish the part of ice-cold space queen.  The bearded Copley has fun as the demented Kruger, but his dialogue is likewise difficult to process.

ELYSIUM has energy and heart, but Blomkamp loses sight of the big picture by Act III.  There’s ample social commentary to be found in his exaggeration of the disparity between the haves and have-nots, but it’s hard to believe Elysium hasn’t a single inhabitant who sympathizes with the Earthlings.  And after a lot of well-handled exposition, the movie’s finale feels condensed—if not rushed (in spite of Max’s ticking life-clock).  It’s also overly violent, in a cheeky, STARSHIP TROOPERS / ROBOCOP kinda way, the bloodlust (exploding bodies, stabbings, grenade-obliterated faces) at times distracting dangerously from the story proper.

Blomkamp raises timely socioeconomic questions but quits on them at the eleventh hour.  It’s never suggested how Max, Spider, and the gang might possibly transform a safe-haven designed for the privileged few into a manageable refuge for mass millions of extra “citizens” conditioned to rough-and-tumble living.  One imagines the sudden influx would exhaust Elysium’s resources in short order, spoiling the bounty for all.

What would Ayn Rand say?  What does Blomkamp think she’d say?  We never know.

We’ve already had at least two dead-Earth pictures this year (AFTER EARTH and OBLIVION)—and that’s not even counting zombie flicks (WARM BODIES) that call for separation of the infected from the protected.  Moroever, Blomkamp’s themes were explored just as thoroughly in cult flicks like SOYLENT GREEN, SILENT RUNNING, and LOGAN’S RUN many eons ago.  But if you’re going to lean on the past a little (or past visions of an ugly future), what better touchstones for your nightmare of a bleak tomorrow?   2 ½ out of 4 stars.