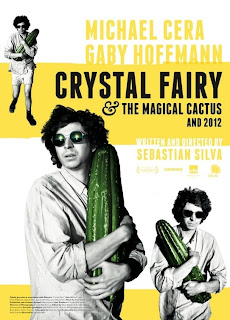 It may not be a popular position to hold in some circles, but taking hallucinogenic drugs can be fun. At times, depending on the attitude with which the taker proceeds, it can even result in a profound experience, or at least an experience that seems profound to the one having it. What's not nearly as much fun is being stone cold sober and hanging out with a bunch of guys tripping their eyeballs out. And however profound an experience these hypothetical druggie friends might have, any attempts to relate the earth shattering personal insights they've just undergone will be far less compelling to the listener than the teller. Sure, there will probably be a few moments when the intoxicated friends do something funny, but most likely you'll get bored pretty fast if you're not in the same frame of mind. Which brings us to CRYSTAL FAIRY.

If you've never had the experience of hanging out with a bunch of twenty-something dudes as they drive around trying to score drug, then hanging out some more while they take the drugs and spend hours looking at their hand and laughing, CRYSTAL FAIRY will more or less give you that experience. The plus side is that the movie is only an hour and a half, whereas your average LSD or mushroom trip can last all night. The downside is, it's still pretty dull and annoying.


If there's a redeeming quality to the film, it's that Michael Cera's character, who puts on a front of being a more serious seeker of consciousness expansion by always quoting Huxley's Doors of Perception, does actually have a character arc and grow as a person over the course of the film. His transformation is enabled as much by learning to feel sympathy for another human being, specifically the “Crystal Fairy” (Gabby Hoffman) of the title, as it is by anything he experiences while under the influence. That makes for some nice moments of genuine human emotional connection towards the end. It's still a mighty tough slog to get there. Maybe some drugs would help. 2 out of 4 stars.