Bonnie and Clyde (August 3rd at the Palace Theatre)

[BONNIE AND CLYDE screens Saturday August 3rd at 8:00 pm at the Palace Theatre in Playhouse Square.] 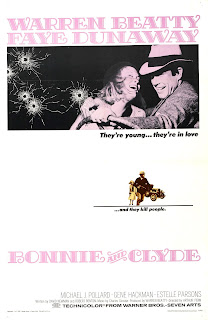 When BONNIE AND CLYDE first premiered, a number of critics condemned it as vile, gory and positively toxic. One reviewer wrote a scathing negative review - then reconsidered, then ran another review retracting his original opinion and giving the movie a big thumbs-up. Clearly this was a film like NATURAL BORN KILLERS (which I frankly hated, myself) that divided opinion leaders in its era, but it wound up being a hit with audiences and film historians. It might have horrified folks in 1967 that BONNIE AND CLYDE is now enshrined as one of the greats, and in revival at the tony Playhouse Square series Cinema on the Square. Which is more than I can say (yet) about NATURAL BORN KILLERS.

Some of filmmaker Arthur Penn’s violence is still shocking (especially the gruesome ending), but much bloodier movies have come out of Hollywood since.

The straight-ahead narrative isn't a very accurate portrayal of the true criminal rampages of Depression-era robbers Bonnie Parker and Clyde Barrow, but then again, the way outlaws manufacture their own romantic myths is part of the theme. The story starts on the day bored young Texas waitress Bonnie (the very sexy young Faye Dunaway) first spies Clyde trying to steal her mom's car. She craves excitement, and he's a charming petty crook who promises an escape. Clyde decides to do bank jobs when he (correctly) realizes that due to the Depression many folks are facing foreclosure and will view bank bandits as heroes (movie was prophetic, damn)

Bonnie -  besides learning to shoot and take an active hand in the crimes - publishes poetry and photos in the newspapers about their exploits (and this bizarre detail is quite true; in fact, there’s an urban legend that Al Capone wrote a public endorsement of Ford Motors vehicles as the best getaway cars. Not quite; it was headline-loving Clyde Barrow who wrote Henry Ford such a fan letter)

The lovers form a small criminal gang with Clyde's brother (Gene Hackman) and a few others, and dig the neat early role for Gene Wilder as one of their victims. Just when things are looking rosy for the duo, authorities catch up with them, and B & C die bullet-riddled in a police ambush led by a vindictive Texas Ranger they once humiliated.

Old-school Hollywood censorship used to dictate that lawbreakers were always punished in the end, and while that certainly holds true here, BONNIE AND CLYDE subverted the studio code by making the killer couple an especially appealing and likeable pair of heroes, more so than the police who pursue them (the script is especially, unfairly unkind to the real-life stalwart lawman who finally brought the bank robbers down). The movie doesn't go out of its way to condemn the bank robbers and their deeds, which seem in some way a natural reaction to the grim economic conditions of dust-bowl America. This notion struck a chord with the 1960s Vietnam War-era audiences, who had their own reasons for learning to mistrust the government, military, police and the `establishment.'

Know that elements of the true criminals' careers - especially their love lives - are even more lurid, and Clyde Barrow's much-theorized homosexuality was a major element in early drafts, but the studio chiefs thought that didn’t fit Warren Beatty’s image well, so it’s been largely purged out of the scenario.

BONNIE AND CLYDE isn't the only movie that the notorious pair inspired. For some older ones that are clear takeoffs, check out GUN CRAZY and THEY LIVE BY NIGHT, regarded by film buffs as real classics. And, somewhere down the line, I’m sure a remake of BONNIE AND CLYDE is being prepped, probably to star, I dunno, Selena Gomez and Justin Bieber. Just as soon as scripter Diabolo Cody can be persuaded to lower their ages to 19 and 20.

Talk about vile and toxic. Times aren’t what they used to be, that’s for sure. My Ford racked up $600 in alternator problems. That’s what I get for being law-abiding. (4 out of 4 stars)
Posted by Charles Cassady Jr. at 12:00 AM