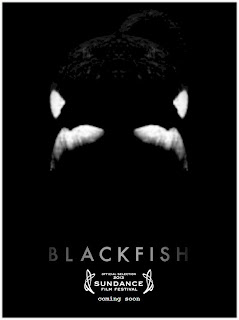 As a kid, I went to the Aurora Sea World park a few times. Personally I would have preferred a trip to Geauga Lake next door to ride the Big Dipper and the Corkscrew, but I didn't have much say in the matter. It may not have had rollercoasters, but Sea World wasn't completely without appeal. I remember seeing a “Superheroes on skis” show when I was a little kid that made quite an impression, and even as a surly adolescent it's hard not to to be impressed by watching dolphins and killer whales perform and interact with their trainers. When the park closed in 2001, I was actually kind of sad to see it go. After watching Gabriela Cowperthwaite's documentary BLACKFISH, however, I'm not nearly so wistful.

Enjoying the entertainment at Sea World requires buying into the notion that these animals are happy and healthy in their decidedly unnatural habitats. The evidence presented here shows that's not at all the case. But it's not just the animals who suffer. Over the the four decades that BLACKFISH looks at, several humans have been injured by captive whales. A few have even been killed, and if one believes the charges made by this film, at least some of those deaths could and should have been prevented.


The primary focus of BLACKFISH is one whale in particular named Tilikum. While there's no disputing that the film takes an anti-captivity slant, you don't have to be a card-carrying member of PETA to detect the smell of something fishy in the way Sea World handled this particular whale. If the interviews with former Sea World employees, animal behaviorists, and others are to be taken at face value, they lend credence to the possibility that Sea World was at least indirectly responsible for the fatal tragedy that befell Tilikum's trainer Dawn Brancheau.


It would have been nice to hear Sea World officials respond to the allegations raised here, but they opted not to participate. Then again, the way the company appears to have covered up certain facts to their employees, the police, and the media says plenty in and of itself. You could say the way Sea World is portrayed here is just the filmmaker's slant, and to be sure Cowperthwaite does have one. Based on the evidence presented by this film, though, it's hard not to believe that her slant is in the direction of the truth. 4 out of 4 stars.