Andre Gregory: Before and After Dinner (August 16th and 18th at the Cleveland Museum of Art)

[ANDRE GREGORY: BEFORE AND AFTER DINNER screens Friday August 16th at 7 pm and Sunday August 18th at 1:30 pm at the Cleveland Museum of Art Morley Lecture Hall.] 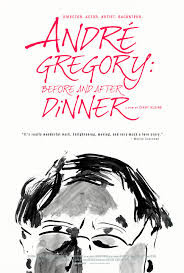 When Alex Rodriguez was on TV protesting his suspension from Major League Baseball, something he said really touched me. He bemoaned that baseball was the only thing he knew, that he had no other skills with which to seek employment.

That pleading resonated with me. Not only did I overspecialize in doing mostly movie reviews all my life, I also must admit here (before I have to go before a Congressional committee) that I too went down to Florida to visit Biogenics and undergo illegal hormone therapy and steroid treatments to sharpen my movie-reviewing skills. It's a tough economy; I needed the edge, just like A-Rod.

Most viewers probably know Andre Gregory best from portraying himself, alongside longtime friend and collaborator Wallace Shawn, in Louis Malle's 1981 real-time docu-dramedy MY DINNER WITH ANDRE. In ANDRE GREGORY: BEFORE AND AFTER DINNER, filmmaker Cindy Kleine profiles Gregory, a patrician-like but creatively passionate actor-playwright-artist, self-described "shaman" and a luminary in avant garde American theater since the 1960s.

One might well say Kleine has intimate access, complete with a Too Much Information full-frontal moment; Andre Gregory has been her husband for 15 years now. Kleine gives an onscreen rundown of all her ex-boyfriends, who appeared to have had a penchant for posing with her wearing very little clothing; she says she'd given up on the idea of marriage altogether when she met the recently widowed Gregory, and sparks flew.

Gregory speaks of his emotionally cold, aristocratic, borderline-sinister European family, who hid their Jewish origins, perhaps because of charges they collaborated in economic espionage for the Third Reich's schemes against France. The thought drives Gregory to tears and obsesses him throughout. Kleine similarly chose the arts as an act of rebellion against her middle-class Long Island Jewish upbringing. Both Gregory and Kleine were closer to their nannies than to their parents; she wonders if mutual family angst cemented the emotional relationship with her much-older groom.

In any case, nearly as long as their marriage has been Gregory's latest project, a fresh staging of Ibsen's The Master Builder, starring and translated by Wallace Shawn (Shawn offers the camera a gentle apology that, amidst all these confessionals, he wants to keep his personal life private). Rehearsed and apparently destined to be performed only in intimate apartment settings, it's the sort of outre thing that made Gregory's reputation, like a legendary grownup take on Alice in Wonderland in the 1970s, recalled via precious bits of TV footage and Richard Avedon photos.

Gregory does allude to his movie guest bits that paid the bills - most of all, to his short-lived supporting part in the sci-fi actioner DEMOLITION MAN, a movie he denigrates as a piece of schlock. Much as that cues a wonderful Sylvester Stallone anecdote, it does look like Gregory has worse cinematic skeletons in the closet than that one (PROTOCOL with Goldie Hawn, for instance).In the meantime, Andre gets updates from ongoing investigations in Europe into whether his family were Holocaust traitors or not, and there is a health crisis coincident with The Master Builder finally premiering.

But late in the picture there's another twist, resonant with viewers who remember Gregory's many MY DINNER WITH ANDRE anecdotes of going to weird communes like Findhorn and having mystical experiences. After a recap of how he auditioned for John the Baptist in Martin Scorsese's THE LAST TEMPTATION OF CHRIST in a shamanic trance-state [SPOILER ALERT], Cindy Kleine decides to fact-check with Scorsese's  people to see if any screen tests survive. What she discovers suggests that Gregory's been telling whoppers all this time...or in the kindest wifely interpretation since Hillary Clinton, has been "re-inventing" himself, going through life as a perpetual storytelling performance, not necessarily reflective of the literal truth of what happened. Maybe he even believes the yarn himself. Yeah, right. In other words, telling whoppers all this time.

So can we credit all this drama after all? About the Nazi family scandal? About one of the only evidently idyllic couplehoods in all showbiz? About Sylvester Stallone?

It does make an odd note on which to end the enjoyable and loving cinematic tribute. But I guess it's no surprise, that `artists' get a free pass on stuff that would mark the rest of us as unreliable flakes, fantasists or whacko nutjobs. If only Alex Rodriguez had taken a few weeks off spring training to get some liberal-arts courses under his belt; then he could go before the media and plead that he was only doing some kind of a role-playing exercise and `performance art' as a clean player, that's all. Not his fault if everyone, including Baseball Commissioners, misunderstood that he was `in character.' Same deal for Lance Armstrong.I should really bring in big money for this type of career advice. 2 3/4 out of 4 stars.