[AN OVERSIMPLIFICATION OF HER BEAUTY screens Friday August 23rd at 7:00 pm and Sunday August 25th at 1:30 pm at the Cleveland Museum of Art Morley Lecture Hall.] 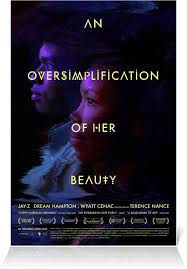 I could write many complimentary things about the semi-experimental AN OVERSIMPLIFICATION OF HER BEAUTY. It will probably be in my ten-best-of-the-year list, assuming I find nine other features even worth mentioning (or assuming I'm not laid off by the Cleveland Movie Blog in imitation of the Plain Dealer laying people off, because, hey, it's Cleveland; layoffs are what we do). Thus this review might seem rather banal in its fawning. So I'll start with some of the drawbacks. I think filmmaker Terence Nance might actually groove on that.

First strike against it, it's in part a film about filmmaking - or, at least, involving the private lives of filmmakers, who communicate and relate largely by the act of filmmaking. Which usually grinds my gears (hear that, Caveh Zahedi?). Come on, young filmmakers, there's more to life than cinema, even if Quentin Tarentino or Jean-Luc Godard make it seem like there isn't. But I could forgive that here; OVERSIMPLIFICATION OF HER BEAUTY is that good.

Secondly, that this is, at least initially, a super-sized student film - or at least erected, apparently, on the pre-existing template of a student film project. Aye, many student films are brilliant, gems of invention and innovation, made by young talents who just didn't know any better than hold back or compromise. This said, student film are also frequently pretentious, self-indulgent, written/starring/produced/animated/scored/production-designed all by the same solitary Orson Welles wannabe, and myopically concerned about, mostly...filmmaking (see above) because the young whelps don't know much of anything else. But I can let that slide here as well.

With subtitles and golden-throat narrator (reminiscent of the late, great Adolph Caesar), we get the backstory that THE OVERSIMPLIFICATION OF HER BEAUTY is really two films de Terence Nance. One is the 2006 film-school short subject, "How Would You Feel?" In it, the NYC filmmaker dissects, in bullet points and chapters, the universal emotional impact of being stood up for hot date by a girl with whom he was madly in love. It seems he had even secretly built a bed just for the occasion - clumsily, going by a Japanese carpentry manual he'd found, and he couldn't even read Japanese, or do proper carpentry.

The larger wraparound movie, "Oversimplification of Her Beauty," bursting with animated interludes (including great stop-motion) by various artists in astonishing and varied styles, proposes a backstory - somewhat creepy, perhaps - of how Nance actually premiered "How Would You Feel?" for an audience that had, front and center, the girl who had stood him up. It was intentionally his big reveal to her about the extent of his infatuation. Now we get what purports to be 2006 footage of them blissfully together after the screening, even an attempt by the lovely lass to make her own sort of response-film. But the fact that her name is fuzzed out throughout (in audio as well as video), and that her movie was never finished, tells us that the relationship did not have the happy outcome Terence wanted. The Plain Dealers of the world ain’t the only ones who give their devotees the brushoff.

But AN OVERSIMPLIFICATION OF HER BEAUTY isn't revenge, resentment or payback against an ex. Or if it is (and since I'm a jaded guy who lost in romance, I can approve anyhow), it's a disarmingly wise and cunning one. The picture comes across as an homage to the singular-yet-universal feelings of lovesickness, lonesomeness and bittersweet loss, as Nance recounts a history of falling for gorgeous, cosmopolitan, cultured, musical, lesbian or otherwise unattainable females (when one seemingly presented no hardships he just lost interest, apparently); of not being able to hold the good times in memory but dwelling on the pain; about going to extremes to capture a girl's heart (like the film-school stunt) to no avail, love’s labor lost.

A lesser filmmaker in this territory might have been downright misogynist (or, at least, whatever it is Woody Allen is), but Nance comes across as absent of hate, rage or rancor. He gives the best line (and there are a lot of good lines) to his girlfriend, who says she fears that since he's an "artist" she'll end up being hurt by him - but she might get hurt by any guy in any case; why do people get into relationships anyway, it's foolish.

Even as Terence Nance's bluesy POV is not entirely bereft of self-pity, the male protagonist does criticize himself for his shortcoming as soulmate material: "emotional unavailability," chronic low-income, no car, frequent tardiness, and perhaps most of all, more in love with an impossible ideal of being in love than any concrete reality.

And, he amusingly describes himself as a victim of the "Cosby Effect," growing up in a stable, supportive household and positive environment that gave him the unfortunate notion that all life was like that. It should be mentioned that Nance is black, as are all his loves, and that numbered among the producers are Jay Z and a pan-African arts group of some sort. But it would be unfortunate if AN OVERSIMPLIFICATION OF HER BEAUTY gets filed away in a marketplace ghetto somewhere as an Afro-specialty item - the way Wendell William's amazing CHAMELEON STREET a generation ago did. The material speaks in a distinctly ethnic voice, yet is blissfully absent of the stereotypes you’d expect, such as victim politics, gratuitous hip-hop, Obama plugs, bounties on George Zimmerman, or what have you. I can’t even recall hearing any damn cuss words! Let along the ubiquitous n-word.

In short, see this picture - one of the few breakup pics I can name that still could succeed as a nice date flick. Before the movie version of 50 SHADES OF GREY comes out and proves to we heartbroken Terence Nances of the world again that chicks of all colors only dig the bad boys. (3 1/2 out of 4 stars)