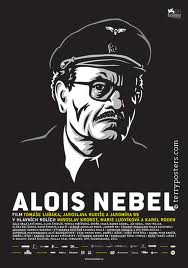 I've lately been seeing a lot of intriguing animated features fill the direct-to-video ghetto, such as TATSUMI and A LIAR'S AUTOBIOGRAPHY. Or have I just been looking for an excuse to miss all these lousy summer CARS, SMURFS and DESPICABLE ME computer-cartoon sequels in theaters?

In any case, the latest is ALOIS NEBEL, which is not a title with any of the Pixar corporate propaganda behind it, but one which still of interest in scoping out, for those interested in offbeat, grownup animation style. Technically, the high-contrast, noirish motion-capture CGI technique here isn't revolutionary - the European science-fiction thriller of a few years back called RENAISSANCE used it to good effect.

Less flashier than RENAISSANCE, this 2011 animated is based on an acclaimed Czech graphic novel that, I understand, had the distinction of being the first graphic novel to come out of the newly minted Czech Republcic. Filmmaker Tomas Lunak renders the tale in black-and-white digital overlays, and sharp-eyed western viewers might recognize under the CGI the prominent Russian actor Karel Roden among the virtual cast. They might also find the look of the movie a lot like the panels of American graphic novelist Daniel Clowes.

The largely passive cipher of a title character is an aging, taciturn, railway-station dispatcher in Czechoslovakia in 1989, as the Cold War enters its terminal phase and the Warsaw Pact nations begin to collapse. Seeing a vagrant man roughed up and arrested at the station makes Alois Nebel begin suffering intense flashbacks to grim memories of Nazi German and Soviet collaboration, and one particular incident that left him guilt-ridden.

He checks himself into a psychiatric clinic, and when word of that leaks out the act costs him his job. A trip to plead with railway administrators in Prague for reinstatement leads Nebel to strike up a relationship with a trainman's widow, now running a boarding-house in the big city. Back in the countryside he talks his way into doing off-the-books chores and services with the crooked father-and-son team running the station. Long collaborators with whatever military dictatorship happened to occupy that part of Czechoslovakia, they now plan to turn the place into a black-market bonanza.

It is a seemingly random chain of incidents without much forward momentum. Only in the closing moments does the accumulation of minor events add up to a revenge-murder conspiracy, in which Nebel is a willing enabler, a little bit of rough justice the unheroic protag can salvage from his spent life.

Even so, loose ends and nagging questions remain, in a moody piece redeemed by style. It's a geektastic debate whether ALOIS NEBEL would have held even the attention it does if it were done more conventionally, in equally shadowy live-action B&W. Does it gain from the cartoon medium, is it just a gimmick that calls attention to itself, or does it not make a different either way? In my recent marathon of alterna-toon viewing, this one does come in third behind TATSUMI and A LIAR'S AUTOBIOGRAPHY. But I'd nonetheless recommend it to anyone over FINDING THE BRAVE DESPICABLE SMURFS 3 KUNG FU CARS UNIVERSITY, or whatever, in search of something offbeat. (2 3/4 out of 4 stars)