[AIN'T THEM BODIES SAINTS opens in Cleveland on Friday August 30th exclusively at the Cedar Lee Theatre and the Capitol Theatre.] 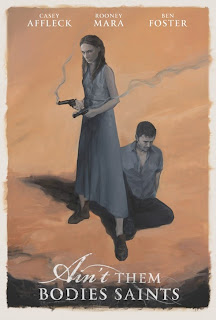 AIN'T THEM BODIES SAINTS is about a romantically involved pair of robbers – Bob Muldoon (Casey Affleck) and Ruth Guthrie (Rooney Mara) – who are seperated when Ruth shoots and wounds police officer Patrick Wheeler (Ben Foster) in a stand off. Realizing they can't get away, Bob decides to take credit for the shot, allowing Ruth to plead that she had been dragged along unwillingly. He does this not just out of love for her, but for the unborn child she has just recently told him she is carrying. Four years later Ruth and her daughter are living a quiet life next door to Ruth's adoptive father Skerritt (Keith Carradine) when Bob escapes from prison. Bob plans to run off with his family and start a new life, but things don't go as he had hoped or expected. Not exactly earth-shatteringly original stuff, but in the hands of a director with an interesting style or slant on the material, it could be made into something worthwhile.

But what if that director gets his style and themes from someone else? Let's just say it's pretty obvious that writer/director David Lowery has seen a few Terrence Malick films. He recreates Malick's visual look, themes, and sense of pacing almost perfectly. Like Malick, Lowery uses natural lighting with a warm color palette and makes considerable use of impressionistic shots that cut back and forth through time and space, often suggesting rather than telling. And in terms of plot and theme, the young criminals in love angle can't help but recall Malick's BADLANDS and, to a lesser degree, DAYS OF HEAVEN. Which, given the increasingly self indulgent works the actual Malick has been releasing of late, is almost kind of welcome.


So can a film that isn't particularly original either in terms of substance or style still be worth watching? In this case, the answer is a qualified “yes”. Lowery puts so much effort into imitation that it can't help but pull those familiar with his influences out of the experience somewhat. Even if you've never seen a Malick film, there's so much effort into getting the look just right that some of the emotion inherent in the story winds up muted. On the other hand, the film looks fantastic, and Affleck, Mara, Foster, and Carradine all give excellent performances. AIN'T THEM BODIES SAINTS may be a fairly straightforward and not especially original crime/romance tale, but it's well made and reasonably entertaining for it's duration. Given how mediocre 2013's crop of films have been, that almost qualifies it as one of the year's best so far. 3 out of 4 stars.