Adjust Your Tracking (August 29th at the Capitol Theatre one show only!)

[ADJUST YOUR TRACKING screens Thursday August 29th at 7:30 pm at the Capitol Theatre for one showing only.] 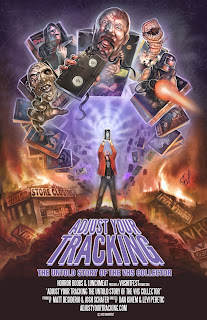 It may surprise some to learn that in this supposed digital age, there are still people who cherish and celebrate the VHS movie format. You can meet them for yourself in ADJUST YOUR TRACKING: THE UNTOLD STORY OF THE VHS COLLECTOR, a new documentary from co-directors Dan M. Kinem and Levi Peretic, both VHS collectors themselves who appear on camera along with their fellow enthusiasts and attempt to explain why someone would spend the kind of time, effort, and money required to track down a copy of something like TALES FROM THE QUADEAD ZONE in all its pan-and-scan analog glory.


As an added bonus, ADJUST YOUR TRACKING also offers a concise but thorough history of the VHS format itself, from its debut in the seventies as something of a luxury item, to its heyday in the early to mid eighties when there was a mom and pop video store on every corner, to its ultimate demise as DVD and other formats offering superior picture and sound quality came to replace it. To this end, the filmmakers have dug up some great old commercials and promotional materials that almost make me wish they had done a whole feature length film of just that kind of stuff.

That would be a whole other movie altogether, though, and the one we have here is just fine as it is. And believe it or not, by the time it's over you may well find yourself understanding and even appreciating these excavators of pop cultural history. Because in many ways, that's what they are.


One interview subject claims that 45% of the films released on VHS have never made the leap to DVD. I don't know how one would check those numbers, but they seem reasonable given the vast amount of straight to video stuff that came out in the eighties, not to mention oddball theatrical releases that are now either tied up with various legal issues or just don't have enough interest to warrant a digital release.


But it's not just the movies themselves that matter; it's the box art. There is nothing that says 1980s video store like the ubiquitous “Big Box” videos released by companies like Wizard and Lightining, adorned with some of the most lurid and misleading artwork ever used part unknowing customers from their cash. It was, in a way, the last gasp of a kind of fun carnival barker approach to film promotion that was the hallmark of the exploitation movie for many decades. Even beyond exploitation movies, VHS boxes were the movie posters of their day, to some degree. Is it really such a surprise that some people feel a sense of nostalgia for them?


It might seem like a downside that virtually all of the collectors interviewed here are primarily interested in collecting horror and exploitation films, but for the moment their segment of VHS collecting is the most prominent. Furthermore, while these collectors do have their primary areas of interest, many of them tend to be almost omnivorous in what they will collect – if it's rare and/or has an interesting box, they'll buy it.

Beyond the information it conveys, ADJUST YOUR TRACKING is also a well made film that perfectly fits its subject. Shot on VHS video in the old 4x3 framing that characterized the home video age, when letterboxing was still a rarity and the idea of a wide screen TV seemed like something out of a science fiction movie. The film flows extremely well, and does a good job of breaking up the inevitable parade of talking heads with classic commercials and clips from various VHS tapes that are generally pertinent to the subject being discussed. Obviously not everyone will be interested in this subject, but it's hard to imagine those who are having any complaints. 4 out of 4 stars.