A Liar's Autobiography (now on video)

[A LIAR'S AUTOBIOGRAPHY is now available on home video.] 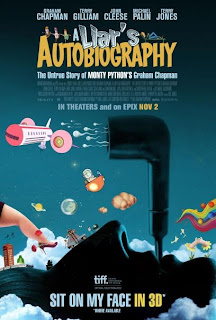 I usually have OCD-style rules about always reading the pre-existing book before watching a movie adaptation - not because I'm all that insane; I just need some kind of protocols that I maintain to put the brakes on me wasting my life possibly watching every movie available at all times. And that way I get an excuse to read a few interesting books, apropos of very little.

One book I managed to skip was A Liar's Autobiography, the 1986 memoir by Graham Chapman, UK comedy writer/actor best known for being one of the Monty Python troupe. The urbane, pipe-smoking Chapman - who would be dead at 48, just four years later, of throat cancer - evidently took a `Pythonesque' approach (well, what would you expect, the Spanish Inquisition?) to his life story, evidently, sort of, based on the evidence of this new feature-film adaptation, also called A LIAR'S AUTOBIOGRAPHY. Guess it's a bit of an occupational hazard, but how truly `Pythonesque' Chapman's Life of Graham was I wouldn't know, because, as I say, I never read the book. Too busy singing about spam with a bunch of Vikings in a diner.

Anyway, that's a pity, because without some sort of guidelines or tip sheet, I must say A LIAR'S AUTOBIOGRAPHY is a frustrating experience, albeit a borderline brilliant bit of multimedia animation. And oh yes, very gay. Very, very gay. I've complained before that everyone has always assigned me gay movies to review, in some sort of conspiracy to embarrass and ruin me, personally and professionally. Now I've gone and done it to myself. No kidding, there are more cartoon penises here than, I don't know, until my editors send me to review CARTOON PENISES: THE MOVIE.

Chapman narrates, literally from beyond the grave. This is because filmmakers Bill Jones and Ben Timlett had the notion to take the late author's audiobook rendering and mate it with moving images (this is not original; the documentary THE KID STAYS IN THE PICTURE was actually Robert Evans' audiobook reading of his showbiz bio, against so many Adobe AfterEffects still photos that it almost qualifies as animation). But the picture also obtained voiceovers from returning Python castmates John Cleese, Michael Palin, Terry Gilliam, Terry Jones and Carol Cleveland - and a few other special guests show up orally (perhaps "orally" isn't a proper word, in context), such as Stephen Fry, Cameron Diaz (as Sigmund Freud) and Lloyd Kaufman. THE Lloyd Kaufman, of Troma? I don't know; next time he does Cinema Wasteland, somebody ask him.

The result, though, is a rather mish-mash phantasmagoria, with several separate UK animation artists/studios handling the material (juxtaposing the phrase "handling the material" with penis stuff is unfortunate, I know). Some is stop-motion, some is cutout-CGI, some is astounding oil-paint-on-glass imagery (kudos to one George Sander-Jackson), and some is really old-school line-drawing and coloring of animation cels. I could really see individual episodes getting Oscar nods if they had been released in the short-subject categories. Put together they mainly disguise that there's not much narrative drive here.

Chapman's scattershot chronology describes growing up the son of an old-school town policeman, affectionately remembered as the classic "Allo allo, what's all this then?" type. Attending Cambridge University on scholarship when it was a hotbed of comedy performers - many associated with a young David Frost, who is mercilessly depicted as a twit - Chapman experimented with straight and gay sex and teamed  with classmate John Cleese (who would profess later he had no idea of Chapman's gender inclinations) to concoct sketches and bits for Frost's projects.

All the dish about the Python troupe - impersonated most often by CGI monkeys - and its inception is breezed over in such a fashion that only ardent fans might even know it's being discussed. Most of the stuff instead addresses Chapman's alcoholism and bedroom interludes with groupies of both sexes (though he maintained a steady "partner," David Sherlock, for two decades. You homosexuals realize that having gay marriage is going to tighten the leash on those "partnerships," don't you?). During the post-MONTY PYTHON AND THE HOLY GRAIL 1970s, when the team's star was rising worldwide,  Chapman was perpetually drunk/debauched. But he seems to have quit boozing cold after letting his fellow performers down too often. Then again, it is called A LIAR'S AUTOBIOGRAPHY.

Chapman eventually relocated to Los Angeles, and there are digs at his celebrity hobnobbing with Elton John, a skull-faced David Bowie, and many others. If Chapman - who took medicine at Cambridge, excelled at his studies and could well have become a doctor like his brother - foresaw his death as clearly as the filmmakers here did, I don't get a sense of it. Then again, it's tough to get a sense of anything substantial from A LIAR'S AUTOBIOGRAPHY, except gay guys like penises, the British Isles host plenty of exciting animation talent, and many folks don't take David Frost seriously. Regardless of FROST/NIXON.

Watching A LIAR'S AUTOBIOGRAPHY on disc, one at least gets the benefit of a short-feature `making-of' extra, ANATOMY OF A LIAR, which serves as liner notes for ordinary folks of what exactly this picture's been on about, with visits to Chapman's favorite pub, interviews with the animators and David Sherlock and suchlike. It is pretty telling that a film that amounts to a Monty Python reunion has largely skipped mainstream-theatrical release. Fans, of cutting-edge animation as well as the Pythons - and, I guess, queer-cinema completists -  should still check A LIAR'S AUTOBIOGRAPHY out. And who am I to say this isn't exactly how Graham Chapman would have wanted it? A guy who never read his book, that's what I am. Still slogging my way through Stephenie Meyer's The Host, whilst that movie already came and bombed. (2 3/4 out of 4 stars)