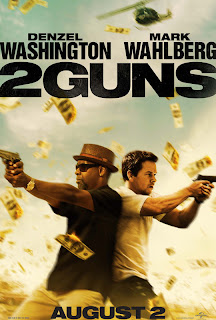 2 GUNS, directed by Baltasar Kormakur (CONTRABAND), comes to us as the summer season is winding down. A summer that has shown little mercy on its faithful patrons. Regardless, 2 GUNS comes star studded, guns blazing and as clichéd as possible.


2 GUNS revolves around Bobby Trench (Denzel Washington), a DEA agent and Michael Stigman (Mark Wahlberg), a naval intelligence officer. Both have been given the same assignment of infiltrating a drug cartel by their respective organization, and while both keep their real identity a secret to the other, both are using each other to get closer to the cartel.

In a desperate attempt to gain ground on their cases, Trench and Stigman decide to rob 3 million dollars from the bank in which in the cartel keeps their money. Soon Earl (Bill Paxton), who has no known connection to the cartel, shows up to find out why his money had been stolen. Not the 3 million as our two leads think, but 43 million. It becomes increasingly clear Earl is a loose cannon and will do anything to get his money back. As things go bad, our characters have to piece together what is actually true and get themselves out of a mess neither saw coming.

There’s no doubt that Washington and Wahlberg have some chemistry. Their approach to their characters actually has a great deal in common, making this not so much an odd paring of buddy cops as much as it is two very likable, charming dudes.

2 GUNS really is a tale of two movies. At its start it feels fresh and fun, with witty banter, jolting editing and quick pacing, At first glance it seems maybe 2 GUNS could be the summer pleaser we’ve been waiting for. It’s first few sequences actually save the film in many respects, but about 40 minutes in, just around the time the plot is coming into focus, the films opts for formula, formula, formula.

You’ve seen, heard and been through it all before. No surprises. This is especially disappointing for a film in which the characters are constantly bragging about how “unexpected” their actions are.

Plain and simple, 2 GUNS underachieves. When you have two of the most charming leading men in Hollywood working together and it’s Bill Paxton who seems to be having all the fun, something’s not right. Audiences might eat it up, but we should be rewarded with something more fulfilling than this.

Ultimate disappointment sets in during the film's climax. We’re treated to an old-hat Mexican showdown where death for the sake of money is treated with the nonchalance that’s become too commonplace. Shoot a guy, insert joke. It’s too tiresome, and by it’s end you realize you’re not totally sure what you’re even rooting for. I guess it’s for the “good guys” to win, but are these even good guys?

In what is turning out to be a pretty unremarkable summer at the movies, 2 GUNS joins the list of movies we can look back on and ultimately see as a missed opportunity. 2 stars out of 4
Posted by Joseph Anthony at 12:49 AM