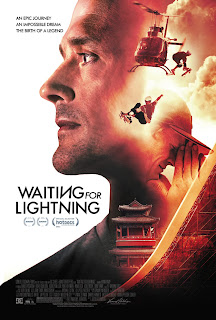 Skateboarding pictures sure have come a long way from the DIY-on-VHS ethic thrash-punks with camcorders taping each other's spills at the playground (shoutout to the Lakewood Skate Park, for accessibility and choice of camera angles). Witness WAITING FOR LIGHTNING, which has an international scope, a big budget, an MPAA rating (as always, needlessly amped to PG-13 because that's what the TWILIGHT fans expect) and a DVD-Blu Ray release via the Samuel Goldwyn Company.

For all that, the extreme-sports documentary doesn't exactly rewrite the rulebook; a not-entirely-original narrative gimmick keeps the viewers' interest-level stoked with the promise that Something Very Bad is going to happen, if you just keep watching.

The setting: China, in 2005. Work begins on an enormous "mega-ramp," built specifically to enable a veteran American skateboard daredevil named Danny Way to skateboard-jump right over the Great Wall of China itself. Documentarian Jacob Rosenberg starts a countdown to the leap, dropping ominous hints the Chinese might have erred in the construction. And that Danny Way may be harboring something of a death wish anyway.

Flashbacks tell us about this extreme-sports legend. Way was the product of a tragic Southern California childhood - his father was found hung in the jail cell after his estranged wife (not Danny's biological mother) set the cops on him. Then for a time, way had the privilege of a laid-back surfer-dude stepfather who got along great with him, and young Danny found his healthiest role models and outlets in the emerging "thrash" culture of the 1970s, in and around the Del-Mar Skate Ranch.

Danny Way was a prodigy on the emerging extreme-skateboard circuit (doing the snowboard, surfboard and motocross on the side). But he also accumulated injuries, some obvious (a broken back), others not so, such as the early deaths of both his stepfather and his extreme-sports mentor Mike Ternasky (the latter, so identified with risky business, was killed in a car wreck caused by an old lady who drove through a red light, so we're told). Though Danny matured to co-found the athletic-gear company DC Shoes and start a family, he still pushes himself with outsized feats, hoisting up his first "mega-ramp" in 2002.

So, the days near to the appointed Great Wall jump, undertaken by what the chirpy Chinese media calls the "man of courage." Will the stunt be the culmination of Way's career? Or a literal suicide mission?

Fans of this genre might not mind the emotional manipulation so much, and there are guest appearances by superstars of the subculture such as Laird Hamilton, Rob Dyrdek and Tony Hawk.
For the rest of us, a neat Chinese travelogue and a toe-in-the-water visit to the realm of extreme athletes. And watch it when you're dealing with Chinese laborers and interpretations of measurements. Hey, any CEO will tell you it's cheaper than hiring Americans to build something, right? (2 1/2 out of 4 stars)