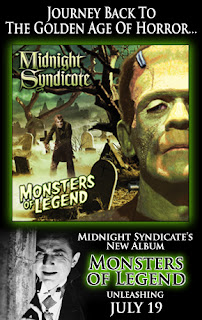 Ever since LeBron left, the only thing significant about Cleveland, we can all agree, is Midnight Syndicate, the music ensemble - primarily Ed Douglas and Gavin Goszka - who manage to make Halloween a year-round occupation.

Douglas, along with fellow John Carroll University graduates in a collective called Entity Productions, started out making "Twilight-Zone"-ish movies, poster graphics and live shows, in the early 1990s, with eerie, synth-filled soundtracks as an adjunct. Their instrumental-music component has taken on a sinister life of its own, and now Midnight Syndicate CDs such as "Gates of Delirium" and "Vampyre: Symphonies from the Crypt," have become Halloween haunted-house standards at theme parks and attractions worldwide.

Midnight Syndicate have contributed also to indie film soundtracks (including not one but two, count 'em, versions of the Ohio-made THE DEAD MATTER) and enjoyed a special commission from Wizards of the Coast to do ambiance soundtracks for role-playing-game sessions.

The latest Midnight Syndicate project has inspiration that goes back even farther than Dungeons & Dragons. It's "Monsters of Legend." With an official street date of July 19, the disc, which comes out on Friday, July 19th, has cuts inspired by the classic Universal Pictures gothic-horror films of Hollywood's golden age - the original FRANKENSTEIN and its sequels, plus DRACULA, THE WOLF MAN, THE MUMMY, WEREWOLF OF LONDON, ISLAND OF DR. MOREAU, THE INVISIBLE MAN and more from the old-school Karloff-Lugosi-Chaney-Ghoulardi canon.

Douglas and Goszka will introduce "Monsters of Legend" live in person to debut the album, with introductory remarks and a listening party commencing around 8 p.m.  Copies of the CD and other Midnight Syndicate merchandise will be available for purchase and autographing, and there will be extra collectible giveaways and fun, in a skeleton-strewn venue with Universal Pictures creature-feature dÈcor. And, yes, fans are encouraged to come in costume, with prizes awarded for best outfits.

For more information, go to the band website http://www.MidnightSyndicate.com