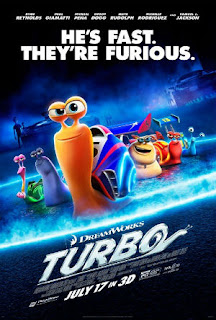 How fast can escargot?

The swiftest garden snail can cover 27 inches an hour, under optimal conditions.  The supercharged slug in Dreamworks’ new TURBO clocks in at over 220 miles per hour—fast enough to qualify for the 500.

The cartoon sports comedy from the makers of , KUNG FU PANDA, and SHREK chronicles the adventures of Theo / Turbo (Ryan Reynolds), a misfit mollusk who toils with his brood in a suburban tomato patch but dreams of life in the fast lane—literally.  He watches NASCAR footage on TV in a nearby human garage and idolizes smarmy Guy Gagne (Bill Hader), a French-Canadian driver who insists “no dream is too big” on the old videotape interviews.

Theo’s brother Chet (Paul Giamatti) wants his speed-obsessed sibling to accept the limitations of their species and content himself with cultivating overripe veggies like everyone else.  Chet’s the resident snail safety director—but even he can’t stop the occasional crow from swooping in and making a meal out of one of their clan.  He’s a play-it-safe snail who, unlike impetuous Theo, is quick to “tuck-and-roll” into his shell at the first sign of peril.

Theo wanders out alone at night after a heated exchange with the dream-dashing Chet, wishes upon what he thinks is a star, and gets stuck to the hood of a tricked-out dragster motoring down a viaduct.  Whisked into the intake manifold, his is altered by the nitrous oxide coursing into the engine.  Upon regurgitation from the monstrous machine, Theo discovers he’s assimilated all the hallmarks of a revved-up hotrod:  His eyes light up like headlights, his rear end flashes red, the calcareous whorls in his shell glow blue, and he broadcasts radio hits by Tom Jones, Run , and Pitbull.

And he can achieve velocities that border on light speed in the stalk-like eyes of the other snails.

Acclimating himself to his new powers, Theo outraces an “evil lawnmower” and a shell-crunching human toddler on a big wheel but still can’t endear himself to the other snails.  When Chet is abducted by a hungry crow, Theo streaks to the rescue—but both are captured by Tito (Michael Pena), a scheming human salesman who races snails for fun when not minding a taco stand with his brother, Angelo (Luis Guzman).  Fortunately, Tito’s a kindly keeper whose lofty aspirations mirror Theo’s own—and whose sibling proves as much a party-pooping pragmatist as Chet.

Hoping to boost business by racing Theo in the 500, Tito talks his neighboring proprietors into anteing up the hefty entrance fee.  Then he commandeers the taco truck and heads east with all his motley human and snail companions in tow, angering Angelo and chaffing Chet.  But infiltrating Gasoline Alley is only half the battle:  The protagonists must also convince Indy Car execs to let Theo race with human-driven cars, overcome myriad raceway obstacles, and win the support of both Chet and Angelo whilst competing against an arrogant, energy drink-shilling champion.

“Your powers could run out tomorrow, Theo,” observes Chet on race night.  “What then?”

“Guess I better make the most of today,” chimes the titular hero.

Nevermind that these snails speak English, comprehend human conversation, and get a chance to vie for pole position with Mario Andretti-like speedsters.  This is kids’ stuff, after all, and a ticket purchase confirms one’s willingness to accept first-time director David Soren’s ridiculous premise.  Get past Theo’s miraculous metamorphosis, and TURBO is a fun ride—an underdog story with built-in lessons about subverting expectations, safeguarding one’s individuality, and actualizing dreams against all odds.  It’s mish-mash of A BUG’S and , with a pinch of BAD NEWS BEARS: BREAKING TRAINING for seasoning.

Reynolds and Giamatti have done better, but their cartoon chemistry here is solid.  The bond / rivalry between Pena and Guzman is likewise credible and comedic.  And the supporting cast brings life to Starlight’s oddball shopkeepers, each of whom contributes to the realization of Tito’s and Theo’s grandiose goals in his or her own way.  Michelle Rodriguez plays a no-nonsense mechanic, Richard Jenkins sells model hobby kits, and Ken Jeong voices an eccentric elderly female nail salon owner.  The laughs and aw-shucks moments are well-spaced, the images kinetic and bright (especially the sequences at Indianapolis Motor Speedway), and Henry Jackman’s score appropriately brisk.  The soundtrack also features retreads of hits by House of Pain (“Jump Around”) and Survivor (“Eye of the Tiger”).2 ½ out of 4 stars.