[Thrill Kill is available for streaming on vimeo. Sunblur is not yet available]

These two short films are from Cleveland indie filmmaking collective The Studio on Mars. 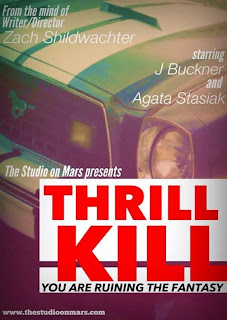 As the shot in Cleveland short Thrill Kill begins, a masked man (J. Buckner) drives a getaway car, a woman (Agata Stasiak) with a throat wound in the passenger seat beside him. The man is frantic and cursing as he calls someone to ask if the hideout is safe. He pulls in, parks, and checks his companion to see if she's still alive. Then things get weird. Then there's a twist. Then it's over.

The film is shot well, and the actors aren't bad for this sort of homegrown concoction. Unfortunately the overuse of profanity in the dialogue makes their delivery seem worse than it really is. Not that I have a problem with profanity per se. I just find that when filmmakers use too much of it in a misguided attempt at “realism” it usually backfires, the incessant swearing sounding forced and ridiculous instead.

The bigger issue is that Thrill Kill doesn't have the guts to go all the way with its concept. Since this is such a short film that relies so much on surprise for effect, I can't really elaborate much more. Let's just say the stage is set for something considerably more disturbing than what we get here. Maybe that would have been crossing a line the cast and crew weren't comfortable with, and it most certainly would have crossed a line with some viewers. Given the set-up, though, it just seems like that's where the short needed to go.

Either way, what writer/director Zach Shildwachter has done with Thrill Kill is to make the horror equivalent of a comedy sketch. It's all set-up and punchline with no real story, characterization, or deeper theme; it's sole purpose to deliver a shock which frankly isn't all that shocking.

Shildwachter has worked on a number of high profile films and TV shows in various capacities, and has produced and written a number of shorts as part of Cleveland's The Studio on Mars. This is his first film as director, and he clearly has considerable skill as a filmmkaer. This particular short didn't quite do it for me, but the talent behind the camera comes through enough that I'll be interested in seeing whatever Zach does down the road. 2 out of 4 stars. 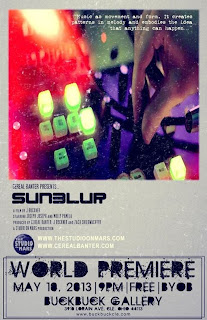 There are a lot of Cleveland/Akron area bands from the past that I wish there were some kind of high quality documentary and/or performance footage of. There's a fair amount of Devo footage around, but it's safe to say we're never going to get an Electric Eels or Rocket From the Tombs documentary. So even though experimental Cleveland band Cereal Banter is far from a household name at this point, it's kind of cool that director Justin Buckner has made this documentary about them.

Overall, Sunblur follows your standard “Behind the Music” formula, minus the rise to fame, descent into self-destructive behavior, and inevitable redemption that hasn't yet happened for the band, and maybe never will. Drummer Joseph Joseph and keyboard player Molly Pamela are interviewed, along with friends, fans, and former band members, and for the most part everyone comes across very seriously. Given the relative anonymity of the band the seriousness can at times verge on self importance. Thankfully we also get a healthy portion of performance footage, much of it with visuals that echo the experimental nature of the music.

The audience for a documentary about Cereal Banter likely isn't that big at this point in time. For those who are interested, though, Sunblur is an extremely well shot and edited film, and at just over 20 minutes if doesn't overstay its welcome. Maybe 20 years down the road it will turn out to be an important artifact of a highly regarded underground band from early in their career, maybe not. Either way Sunblur does a good job of making an accessible film about a fairly inaccessible band. 3 out of 4 stars.
Posted by Bob Ignizio at 12:00 AM