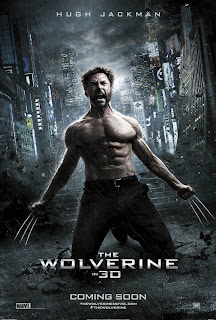 For an installment in a comic book based franchise, THE WOLVERINE starts out as a surprisingly grounded, character driven film. It begins with a flashback to a WWII prison camp in Nagasaki. Just as the atomic bomb is being dropped, Logan aka Wolverine (Hugh Jackman) convinces prison guard Yashida (Ken Yamamura), who had earlier set him and the other American POWs free, to join him in the deep well where he had been kept captive. Still, some of the effects of the blast reach underground requiring Logan to shield Yashida with his own body. Logan appears seriously wounded, but thanks to his mutant healing power he quickly makes a full recovery. Not surprisingly this makes quite an impression on Yashida.

As Logan wakes from this dream/flashback, the story proper picks up many years later, apparently not long after the events of X-MEN: THE LAST STAND. Logan has given up super heroics in favor of being a hermit, unable to fully deal with having killed the woman he loved, Jean Grey (Famke Janssen), in order to prevent her from destroying the world. He gets dragged back into life by the impending death of Yashida (now played by Haruhiko Yamanouchi). Yashida sends precognitive mutant Yukio (Rila Fukushima) to find Logan and bring him to Japan for one final meeting.

To repay his debt to Logan, Yashida wants to give him his samurai sword and another gift: he claims he can take away Logan's healing ability, removing the burden of immortality from the mutant's shoulders and taking it on to his own. As much as Logan misses Jean, who he sees nightly in his dreams beckoning him to join her, he passes on the offer. He plans to return to his solitude, but when Yashida dies and his granddaughter Mariko (Tao Okamoto) becomes the target of Yakuza assassins at the funeral, plans change.

It's really only at this point that the film kicks into action movie gear, and that's just fine. Taking time to develop the characters and set up their emotional states goes a long way towards getting the audience invested in the story. And thankfully, once the action does start the movie doesn't feel the need to turn into yet another exhausting and empty non-stop thrill ride. Director James Mangold (WALK THE LINE, 3:10 TO YUMA, IDENTITY, GIRL INTERUPTED) understands what most modern action directors don't: pacing is crucial. Without ups and downs in the level of intensity, everything is always cranked up to eleven and it just starts to feel tedious rather than exciting. And really, after a martial arts fight on top of a 300 mph bullet train, you need to take a breather.

For much of its running time, THE WOLVERINE feels like a gritty martial arts film almost in the vein of something like THE STREET FIGHTER or ENTER THE DRAGON more than a modern action or superhero flick. Sure, the main character has retractable claws instead of a sword or nunchucks, but for the most part the film feels more real world based than your average super hero movie.

The first troubling sign that things won't stay that way is Viper (Svetlana Khodchenkova), the mutant doctor who was treating Yashida and who clearly has a hidden agenda. She also has a snakelike tongue and the ability to pass poisonous venom by touch. And yet she really serves little function here other than being a plot device and a placeholder for the film's real villain. And that's where we get into the main problem with THE WOLVERINE.

There simply is no strong villainous presence in the film because the main bad guy, a giant hulking suit of armor called Silver Samurai, is kept under wraps until the climactic fight scene. It's like the way the Frankenstein monster would sit out almost all of HOUSE OF FRANKENSTEIN and HOUSE OF DRACULA only to be revived in the last ten minutes just to lumber around a bit before the castle gets blown up or flooded. Even as a kid, I thought that was a rip-off, and that's pretty much how it feels here. On top of that, while the Samurai's motivation is clear, what isn't is how he got to that point. That's about as deeply as I can delve into this area without entering spoiler territory, though.

You often hear film critics comparing movies to comic books and/or video games in a snarky and dismissive manner. Most of the time those critics have so little experience with these other mediums as to render their opinions on the subject worthless. The truth is, most comics and video games have more fully defined characters and better written plots, and rely less on spectacle and cheese, than 90% of modern mainstream Hollywood films, whether they're based on comics or video games or not. That's certainly the case here, as the 1982 miniseries that serves as the primary source material for THE WOLVERINE has a far more straightforward and believable plot. While some changes are understandable and necessary, ones that harm rather than help a film are not. And it bears mentioning that the film is in 3D for no discernible reason. See it in 2D if you can.

Thankfully Jackman is so committed to this character that his performance manages to smoothe over a lot of the rough spots. The supporting cast is solid as well, with Fukushima in particular showing a good bit of screen charisma, and Janssen bringing an emotional gravity to scenes that a lesser actress might have just phoned in. The film's other big asset is Mangold. He's a solid meat and potatoes filmmaker with a firm grasp of both story and technique. His films look good visually, but unlike so many of the music video hacks being given the reigns of modern action films, he's more interested in working in the service of the movie he's making rather than calling attention to himself. And if everyone's best efforts can't quite manage to turn THE WOLVERINE into a great movie, they at least make it an entertaining, if occasionally frustrating, one. 3 out of 4 stars.