[THE WE AND THE I screens Wednesday July 24th at 7:00 pm at the Cleveland Museum of Art.] 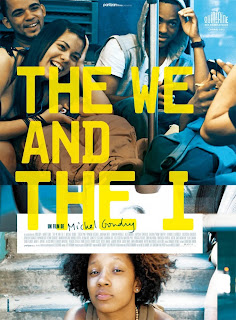 French director Michel Gondry, known for stylish music videos and THE ETERNAL SUNSHINE OF THE SPOTLESS MIND, workshopped for several months with a group of Bronx teens to create THE WE AND THE I, a cinema vérité-style drama in which a group of high school students ride a city bus home on the last day of school. It's a promising subject — the improbably long bus ride lets us observe the kids' conversations, conflicts, heartaches, flirty texting, crushes and rejections, punctuated by the jaunty old-school sounds of Young M.C. But, like the cute radio-controlled miniature bus that gets crushed by traffic in the opening credits, Gondry's interesting idea gets trampled by sensationalism.

The kids on the bus are depicted as rowdy, profane bullies, calling to mind “teenage menace” movies of the '50s like BLACKBOARD JUNGLE. Anyone who's spent time with urban teenagers would know that this picture is distorted, but the film's documentary-like style suggests it's a genuine slice of life. A group of bullies sit in the back row of the bus, tormenting some elementary school boys and an elderly white lady, who calls them “apes from Africa.” Someone's guitar gets smashed, without any consequences. Several boys moon lasciviously over an ordinary-looking white girl riding her bicycle alongside the bus, shot for some reason in slow motion. A girl agonizes over the guest list for her Sweet 16 party, while another (Teresa Lynn) is mocked for showing up in a blond wig. Teresa sketches pictures of her classmates and harbors a crush on one of the bullies (Michael Brodie). A boy recites a boastful fantasy about partying with supermodels and Donald Trump. A girl shows off a water bra that she claims her dad made her wear — unlikely! — as a kind of chastity belt. A gay couple tearfully break up (a moment Gondry claims was real and unscripted). There's lots of talk about sex, drinking and parties, illustrated with flashbacks that disturb the film's illusion of realism.

Given that it's made to look like a documentary, and has kids playing versions of themselves, you might expect the film to reflect real life. Let's start with the bus ride from the Bronx, which seems to take many hours, because by the time the trek is over, it's pitch black outside. Where do the kids live, Delaware? (If this is their daily commute, it's no wonder they're crabby.) The driver (Mia Lobo) is blissfully indifferent to the mayhem on her bus; at one point, she quotes the Dalai Lama. Has Gondry ever ridden a city bus? A driver doesn't have to be Cleveland's Artis “Uppercut” Hughes, but in the real world, there's no way these kids wouldn't be thrown off the bus.

One of Gondry's themes, reflected in the title, is how kids are “more interesting and complex” when in smaller groups. The film's final act illustrates this: the few students remaining on the bus have deeper, more heartfelt conversations. Michael and another boy, former adversaries, discover a shared interest in cars. Teresa and Michael find the basis of a friendship, despite her hurt feelings. It would be nice to say that this last section redeems the film, but it's a long and barely tolerable ride getting there.

If you got your impressions of urban kids from this film alone, you'd think they were savages. Having spent time with students from city schools, I've found them no different from any other youngsters, concerned with schoolwork, parents, siblings, friends, sports, extracurricular activities. Gondry is a creative filmmaker, and he has coaxed naturalistic performances from his nonprofessional cast, accurately capturing the cadences (if not necessarily the content) of contemporary teen conversation. But the film's sensationalized portrayal of teenagers, described by one online commenter as “thugs-in-progress,” reinforces negative stereotypes about minority youth – the kind of stereotypes that can make someone describe an ordinary teenage boy as looking “suspicious." 2 out of 4 stars.
Posted by Pamela Zoslov at 3:07 PM

Email ThisBlogThis!Share to TwitterShare to FacebookShare to Pinterest
Labels: Cleveland Museum of Art, Cleveland OH, drama, Michel Gondry, Movie Review, Pamela Zoslov, The We and the I